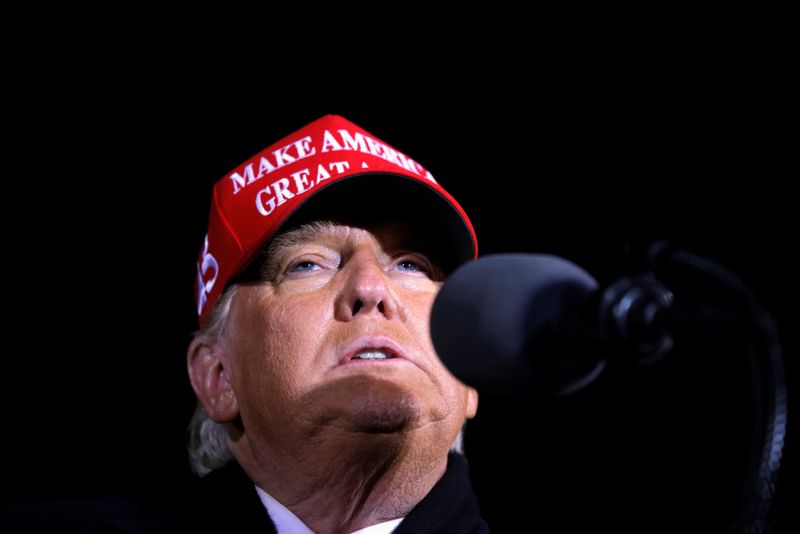 By Trevor Hunnicutt and Alexandra Alper

PHILADELPHIA/WASHINGTON (Reuters) – After a rancorous presidential campaign that exposed the depth of the political divisions in the United States, Americans streamed to the polls on Tuesday to choose either incumbent Donald Trump or challenger Joe Biden to lead a pandemic-battered nation for the next four years.

Voters lined up around the country to cast ballots, with no signs yet of disruptions at polling places that some had feared after a heated campaign marked by provocative rhetoric.

Ahead of Election Day, just over 100 million voters cast early ballots either by mail or in person, according to the U.S. Elections Project at the University of Florida, driven by concerns over crowded polling places during the coronavirus pandemic as well as extraordinary enthusiasm.

The total has shattered records and prompted some experts to predict the highest voting rates since 1908.

Biden, the Democratic former vice president who has spent a half century in public life, has held a consistent lead in national opinion polls over the Republican president and appeared to have multiple paths to victory in the state-by-state Electoral College that determines the winner.

Trump is close enough in several election battleground states that he could repeat the type of upset he pulled off in 2016, when he defeated Democrat Hillary Clinton despite losing the national popular vote by about 3 million ballots.

“I think we’re going to have a great night,” Trump said during an appearance in Arlington, Virginia, across the Potomac River from Washington, where he thanked campaign workers. “But it’s politics and it’s elections, and you never know.”

“Winning is easy. Losing is never easy – not for me it’s not,” Trump added.

Trump, looking somewhat tired and admitting his voice was “a bit choppy” after delivering speeches at numerous raucous rallies in the final days of the campaign, said he was not yet thinking about making a concession speech or acceptance speech.

If the election result is close, it potentially could be days before the outcome is known, especially given the massive surge in voting by mail due to the pandemic. Trump said he expected that the outcome could be known on Tuesday night.

Biden traveled to his birthplace of Scranton in the pivotal state of Pennsylvania on Tuesday morning. Speaking to a couple dozen volunteers using a bullhorn, Biden returned to some of his familiar campaign themes, promising to unite Americans and “restore basic decency and honor to the White House.”

He later stopped at his childhood home, where he signed one of the living room walls, writing: “From this house to the White House with the grace of God. Joe Biden 11-3-2020.”

Biden’s low-key stop in Scranton was in sharp contrast to Trump’s appearance there on Monday, when he delivered a speech to more than 5,000 supporters at an outdoor rally.

Supporters of both candidates appeared to agree the election was a referendum on Trump and his tumultuous first term. No U.S. president has lost a re-election bid since George H.W. Bush in 1992.

Monique King, a 54-year-old surgical technologist, headed straight for her polling site at a college basketball gym in Santa Monica, California, at 7 a.m. after finishing a 12-hour overnight shift at her hospital.

“I think that the coronavirus was mishandled,” King said. “I think we have too many deaths. I can’t do another four years of Trump. … Lie after lie after lie.”

In McConnellsburg, Pennsylvania, voters lined up, bundled in jackets and hats on a chilly morning.

“He’s a bit of a jerk, and I appreciate that,” Martin Seylar, a 45-year-old welder who had just finished his shift, said of Trump, his preferred candidate. “He doesn’t get everything that he says done, but the way I see it is he’s trying, versus where everybody else blows smoke at us.”

Among the most closely contested states that are expected to determine the outcome are Pennsylvania, Florida, Wisconsin, Michigan, North Carolina, Arizona and Georgia, with Democrats hoping that Biden may even threaten Trump in states that once seemed like Republican locks such as Ohio, Iowa and Texas.

The pandemic, which has killed more than 231,000 Americans and left millions more jobless, ensured that Election Day felt far from normal, with poll workers and voters in masks and people keeping their distance from one another. Experts predict the vote total could reach 160 million, exceeding the 138 million ballots cast in 2016.

In anticipation of possible protests, some buildings and stores were boarded up in cities including Washington, Los Angeles and New York. Federal authorities erected a new fence around the White House perimeter.

A judge ordered the U.S. Postal Service to sweep some mail processing facilities on Tuesday afternoon for delayed ballots and immediately dispatch them for delivery in pivotal states such Pennsylvania and Florida among other places.

Meanwhile, the FBI was investigating a spate of mysterious robocalls urging people to stay home on Election Day.

Wall Street’s main stocks indexes jumped as investors bet that the election could end with a clear victory for Biden and a swift deal on more pandemic-related fiscal stimulus.

Trump, 74, is seeking another term in office after a chaotic four years marked by the coronavirus crisis, an economy battered by pandemic shutdowns, an impeachment drama, inquiries into Russian election interference, U.S. racial tensions and contentious immigration policies.

Biden, 77, is looking to win the presidency on his third attempt after a five-decade political career including eight years as vice president under Trump’s predecessor, Barack Obama.

Voters on Tuesday will also decide which political party controls the U.S. Congress for the next two years, with Democrats narrowly favored to recapture a Senate majority and retain their control of the House of Representatives.

Biden, who has put Trump’s handling of the pandemic at the center of his campaign, promised a renewed effort to combat the public health crisis, fix the economy and bridge America’s political divide. The country this year was also shaken by months of protests against racism and police brutality.

Trump on Tuesday again downplayed the pandemic, saying the country is “rounding the corner” even as numerous states set records of new infections in the final days of the campaign.

The most closely watched results will start to trickle in after 7 p.m. EST (2400 GMT), when polls close in states such as Georgia.

Some crucial states, such as Florida, begin counting absentee ballots ahead of Election Day and could deliver results relatively quickly on Tuesday night. Others including Pennsylvania, Michigan and Wisconsin are barred from processing the vast majority of mail-in ballots until Election Day, raising the possibility of a vote count that could stretch for several days.

“This is an Election Day that may end up looking like an election week,” Democratic U.S. Representative Cheri Bustos said.

Trump has asserted, without evidence, that mail-in ballots are subject to fraud. He has also argued that only election night vote tallies should count, even though states have historically taken more time to finalize tallies. He has suggested he might try to use the courts to halt counting.

Trump was expected to spend most of Tuesday at the White House, where an election night party is planned for guests who will be tested for COVID-19.

Will a Nonpolitical “Silent Majority” Stop the Left? | Tho Bishop

How to Maximize the Platinum Plus Mastercard – NerdWallet

Franklin Templeton MF gets a YES for winding up of six...