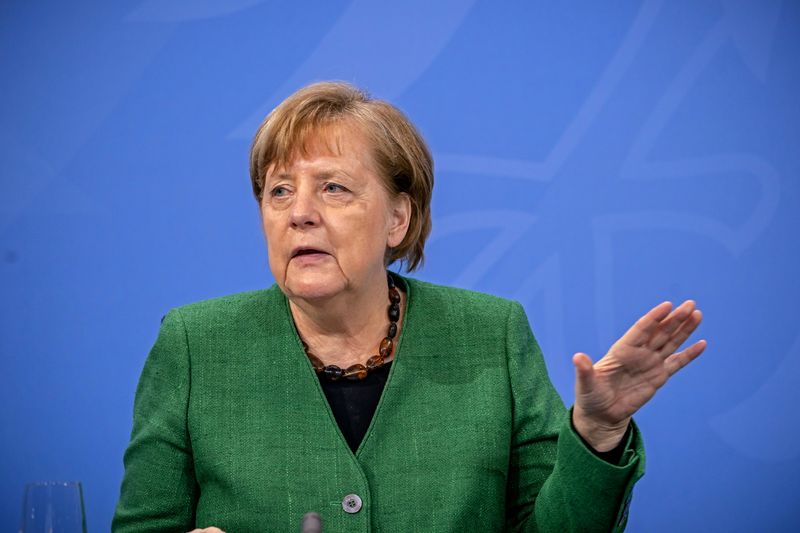 BERLIN (Reuters) – Chancellor Angela Merkel and leaders of Germany’s federal states are set to ditch a plan agreed on Tuesday for two extra “rest-days” around the Easter holidays to try to break a third wave of the coronavirus pandemic, government sources said on Wednesday.

At talks that ran into the early hours of Tuesday, Merkel and the leaders of Germany’s 16 states had agreed to call on citizens to stay at home for five days over the Easter holidays, declaring April 1 and April 3 as extra rest days.

Merkel, who had wanted an even tougher stance to fight the pandemic, called an unexpected meeting with leaders of the federal states for Wednesday morning to discuss the situation.

The crisis meeting took place against a backdrop of growing public frustration with the conservative-led government over the slow rollout of COVID-19 vaccines and extended lockdown measures.

“No plan, no clue, no courage,” ran a headline in the online edition of the mass-selling Bild daily above a picture of Merkel and two state leaders.

A poll released on Wednesday showed support for Merkel’s conservatives slumping to its lowest in over a year ahead of a national election in September. Merkel, who has led Germany since 2005, will stand down before the vote.

At the talks earlier this week, Merkel pushed for reversing plans for a gradual re-opening of the economy agreed earlier this month after a sharp rise in the infection rate.

But state premiers pushed back, only agreeing to call on citizens to stay at home for five days over the the Easter holidays to try to break a third wave of the pandemic.

The move drew criticism from all sides, with businesses lamenting the extended lockdown and medical experts saying the new measures were not tough enough to prevent the exponential spread of more infectious variants of the virus.

Armin Laschet, the leader of Merkel’s CDU and premier of Germany’s most populous state, told the regional parliament he expected a very critical discussion on Wednesday about what had happened during the talks earlier this week.

The CDU suffered historic defeats in two state elections earlier this month, dogged by frustration over the slow vaccine rollout and the extended lockdown measures, as well as a scandal over the procurement of face masks.

The conservative bloc has yet to settle on a chancellor candidate, and is already missing the “Merkel bonus” she has brought them with four consecutive national election victories.

The number of cases per 100,000 in the last seven days, which the government has used as a key metric to decide on lockdown steps, was stable at 108.