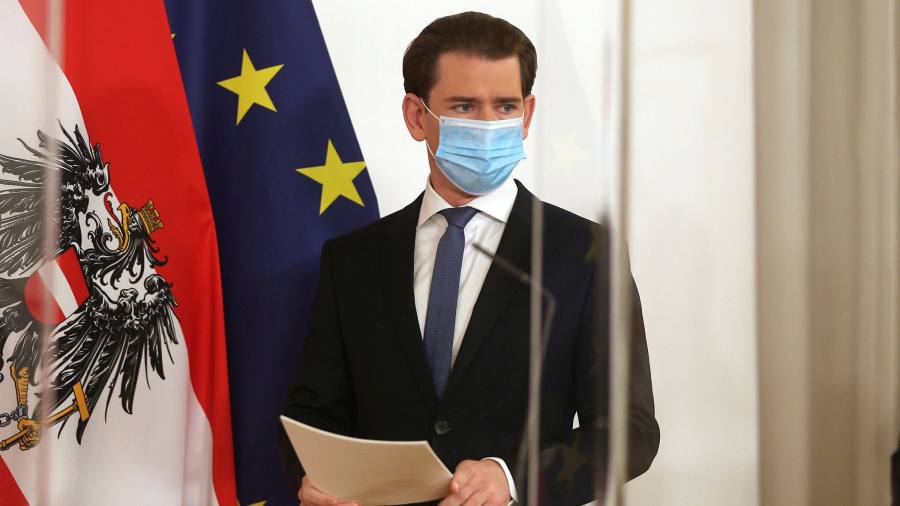 Austria’s government has ordered one of the strictest lockdowns in Europe, with chancellor Sebastian Kurz telling the public to “meet nobody” as the country battles a surge in coronavirus infections.

“One contact is one contact too many,” Mr Kurz said on Saturday, as he unveiled a raft of restrictive measures that will put much of public and economic life in the alpine country on hold.

An “around-the-clock” curfew will apply from Tuesday, with people only allowed to leave their homes to buy groceries, travel to essential work or provide urgent care.

Austria’s second lockdown will be stricter than others in Europe, such as that recently imposed in France, because schools will also close.

Only supermarkets, pharmacies, banks and post offices will be allowed to stay open.

Working from home will be mandatory, except for those who provide essential services.

The government introduced a range of softer restrictions earlier this month in an effort to curb the growth in cases, but despite these efforts officials have been alarmed at the speed numbers have risen.

Health minister Rudolf Anschober, speaking alongside Mr Kurz at a press conference on Saturday, said that the number of patients with Covid-19 in the country’s hospitals had doubled in the past two weeks.

Mr Anschober warned the country’s health system was in danger of being overwhelmed without urgent action.

“Throughout Europe, the second wave is more dynamic, more powerful and harder than the first,” Mr Anschober said.

The latest figures show that Austria has overtaken Belgium in recent days to record the highest number of new infections per million inhabitants in western Europe, according to the Financial Times Covid-19 tracker.

Austria’s experience of the first wave of the pandemic was relatively mild. Mr Kurz’s government won plaudits for its swift action as it learned lessons from other countries in tackling the spread of Covid-19.

Mr Kurz was even instrumental in championing a small group of countries that effectively combated the pandemic in the spring. The group, which also included Australia, New Zealand, Israel, Denmark, the Czech Republic and Greece, was informally referred to by Austrian officials as the “smart seven”.

Governments across the continent have been struggling to contain the autumn virus surge. Earlier on Saturday, Greece announced the closure of all schools until at least the end of the month, after the country’s health experts warned that existing restrictions — including a curfew — were failing to slow the pandemic quickly enough.

Italy broadened restrictions to the regions that include the cities of Florence and Naples, while a panel advising the Swiss government called for bars and restaurants to close.

Despite a breakthrough this week in the search for a vaccine, ministers in a number of countries have made it clear that they expect some restrictions to stay in place for weeks, or even months.

Jean Castex, French prime minister, told daily Le Monde newspaper that the government was working on a Covid-19 plan that would last until next summer.