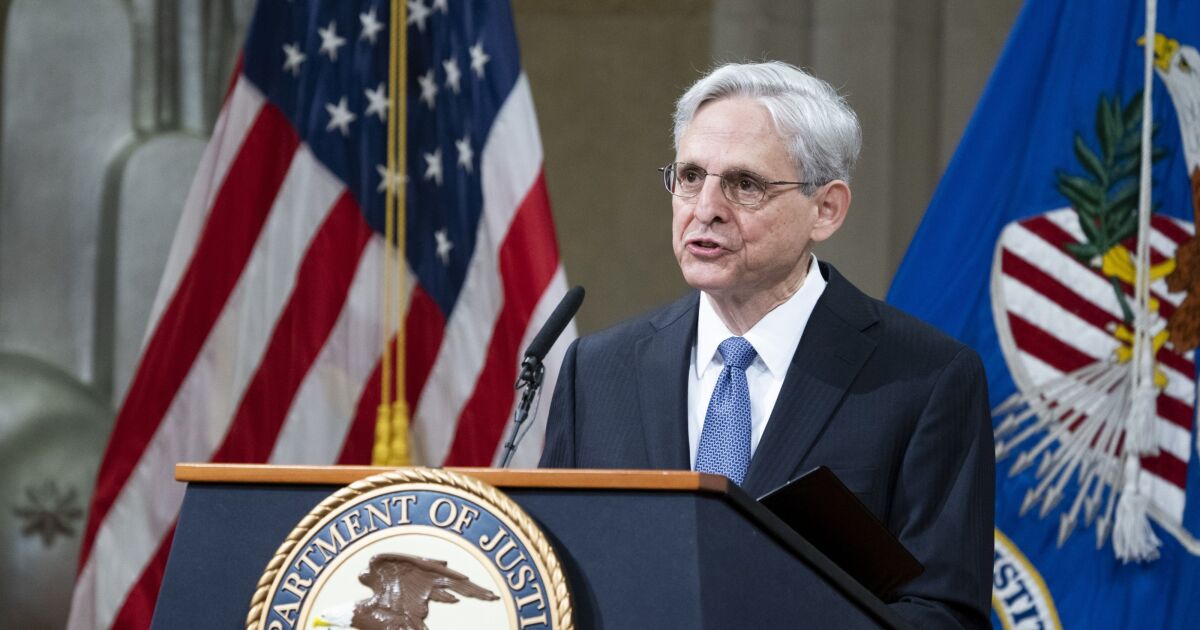 WASHINGTON — In the final months of the Trump administration, the Department of Justice launched a plan to consider changes to its bank-merger review process, raising industry hopes that the outdated regime would be overhauled.

But that was before the November election. With the Biden administration now calling the shots and the department led by Attorney General Merrick Garland, progressives are now urging the DOJ to institute a tougher review process to address branch closures and other potential economic harms for lower-income consumers posed by consolidation.

“The general direction of merger review has turned 180 degrees since the 2020 election,” said Jeremy Kress, a business law professor at the University of Michigan and a former attorney at the Federal Reserve, where he advised the agency on bank merger approvals. “When the Trump administration started reviewing the bank merger standards, it was telegraphing that it was planning to loosen the standards to make them easier to pass. I do not expect that the Biden administration will follow through in that direction.”

In September, the DOJ invited public comment on a plan to update reviews of bank mergers for antitrust concerns. The department released more than a dozen questions including whether the process should scrutinize online lenders more closely and whether rural areas should have different market-concentration thresholds than urban areas. The comment period ended Oct. 16.

Many in the industry saw the effort as potentially benefiting smaller banks. Some also hoped the department would consider competition from fintechs and other nonbanks before determining that a merger affords an acquirer too much dominance over a financial services market.

In a February speech, Federal Reserve Gov. Michelle Bowman argued it was time for the agency to update its own review process of bank holding company mergers to better reflect the competition smaller banks face from tech companies.

Brad Bolton, president and CEO of Community Spirit Bank in Red Bay, Ala., said regulators’ thresholds for market concentration have a stronger effect on the country’s smallest banks, particularly in areas with already-limited bank presence.

But progressives who submitted comment letters have urged the DOJ’s Antitrust Division to strengthen — not weaken — the competitive thresholds and standards regulators consider before approving bank mergers.

“Rather than taking actions that would weaken this analysis or allow mergers to pass the screening criteria with looser concentration thresholds than those that currently exist, the Division should instead strengthen these thresholds and use more specific market definitions to ensure that [low-to-moderate-income] communities are not left without access to banking services,” wrote Sen. Elizabeth Warren, D-Mass., in a comment letter.

Some argue that the DOJ’s review process should more effectively weigh the impact of branch closures on LMI consumers. They cite data from the Federal Deposit Insurance Corp. showing that total branches operated by commercial banks declined by nearly 7.5% between 2012 and 2019, though a significant proportion of that was due to institutions expanding mobile banking options instead of consolidation.

“The almost sole emphasis on antitrust considerations in the existing DOJ merger review analysis is insufficient in attaining the objectives of public benefits required by banking law,” wrote the National Community Reinvestment Coalition wrote in a comment letter.

“It is not enough for banks to be under the spur of competition and offering reasonable rates if they have significantly reduced branches and loans after their mergers,” the NCRC said.

To be clear, neither the DOJ nor the Fed have given very clear signals about their next steps in making any changes to their bank merger review processes. At his confirmation hearing, Garland only said he would “vigorously” enforce antitrust law. “I take it very seriously and have throughout my entire career,” he said. “The Supreme Court has repeatedly referred to antitrust law as the charter of American economic liberty, and I deeply believe that.”

But some on the left say the push to modernize the review process in the Biden administration could be used to more fundamentally change how regulators assess the impact of consolidation on local communities.

“We know, based on empirical evidence, that mergers in the aggregate hurt consumers and destabilize the financial system,” said Kress. “They increase prices, lower the availability of credit, create more concentration, and that concentration creates more risk.”

“I’d expect the priority [under the Biden administration] would be to have standards that protect consumers and the broader financial system,” he added.

But for an industry accustomed to juggling regulatory oversight from multiple federal regulators, the requirements behind bank merger review are already strenuous. In addition to review from their direct bank supervisors, institutions seeking to merge bank holding companies must receive approval from the Fed. If approved, those deals must also withstand scrutiny from the DOJ, which can still sue to block a deal.

Banks’ current framework dates back to the 1990s, when bank regulators and the DOJ issued joint guidelines laying out the typical thresholds and factors they would consider before determining whether a given merger would have harmful effects.

While regulators from the DOJ and Federal Trade Commission would later lead an effort to broadly modernize merger review guidelines in 2010, that update excluded banks, leaving them with the same framework established in 1995.

Bank advocates say the decision not to update their regulations has put them at a distinct competitive disadvantage relative to other industries, and even more so compared to nonbank competitors, like credit unions and online lenders.

“The carve-out was unnecessary at that time and remains unnecessary and inappropriate today given the realities of competition in today’s banking markets,” the Bank Policy Institute, a trade group representing the nation’s largest banks, wrote in a comment letter, responding to DOJ’s advance notice of proposed rulemaking. “It imposes undue costs and burden on bank merger applicants, the bank regulatory agencies, and the Department, and thus stands in the way of efficient functioning of markets and government.”

Today, the push from banks to reform merger reviews is focused on updating the standards regulators use to determine market concentration. If a proposed deal gives a bank a dominant presence in a market that exceeds those thresholds, the government can object.

The DOJ currently uses a calculation known as the Herfindahl-Hirschman Index, or HHI, which is a point scale from 0 to 10,000. A higher score signals a more concentrated market and potential competitive concerns.

Since 2010, the DOJ and FTC have said a merger in nonbank industries is likely to be challenged by regulators if that deal results in a market with a HHI score greater than 2,500 and a score increase of more than 200 points. For banks, however, the acceptable HHI threshold is set lower, at only 1,800.

According to BPI, “simply raising the current threshold to 2,500 points as an overarching approach is the best way forward.”

Smaller banks, meanwhile, argue that mergers between two institutions that both have ties to a community should be viewed with a different lens than acquisitions by a larger bank looking to enter a new market.

Others say today’s antitrust standards for bank mergers do not sufficiently weigh the impact of competitive forces from technology.

“Traditional antitrust methodology is still relevant, but it’s about acknowledging the data sources we have are woefully incomplete and need to be updated to make them relevant,” said Neill. “Online lending, remote deposit capture, other tech developments, none of that is captured in the data used to analyze mergers today.”

“Unless those data sources can be updated — and I don’t know how likely that is — it seems that raising the HHI thresholds is called for,” Neill added.

But progressives counter that regulators have already been far too permissive of industry consolidation in recent decades, having seldom denied bank mergers since the 1980s. According to data compiled by the Federal Reserve, the agency received 3,819 merger applications between 2006 and 2017 and did not formally reject one, though 503 were withdrawn by applicants.

“What we’ve seen is a continuing consolidation of the industry and a small number of very, very large institutions, and that seems to be what the regulators wanted,” said Arthur Wilmarth, a professor emeritus of law at George Washington University. “That was clearly a policy decision they made as an overall deregulatory policy which, in my view, has never been walked back.”

As consolidation has continued, some economists and policy analysts have urged regulators for years to look beyond competitive concerns from a merger and consider a broader constellation of effects, generally referred to as the non-price harms resulting from merger activity.

“[T]he DOJ’s current approach ignores many of the non-price harms that stem from bank mergers, including increased systemic risks, expansion of ‘too big to fail’ subsidies, exacerbated conflicts of interest, and reductions in key measures of product quality, such as consumer privacy,” wrote Kress and Rohit Chopra, an FTC commissioner and currently the nominee to lead the Consumer Financial Protection Bureau, in a comment letter to the DOJ.

Of particular concern for merger skeptics is the impact bank consolidation often has on the presence of bank branches in particular communities. When a branch closes in a given area, advocates say, small-business lending often declines as well.

“The most important predictors of the amount of small business lending by large banks in metropolitan areas are the number of branch locations and county level GDP,” the NCRC wrote in a report issued earlier this month on the impact of branch closures on community credit access.

At the same time, some analysts argue that the relationship between consolidation, branch closures and a community’s financial well-being is less clear cut than some merger skeptics would assert.

“There can be both real harms from bank mergers, and they can also be overstated, and I think that may be the case here,” said Diego Zuluaga, a principal at Fingleton and a former associate director at the Cato Institute. “Eliminating bank branches from a community can be followed by bad social effects, but it can be difficult to identify which trend drove the other. The branch closures could have been economically justified and they might have happened even if there wasn’t a merger.”