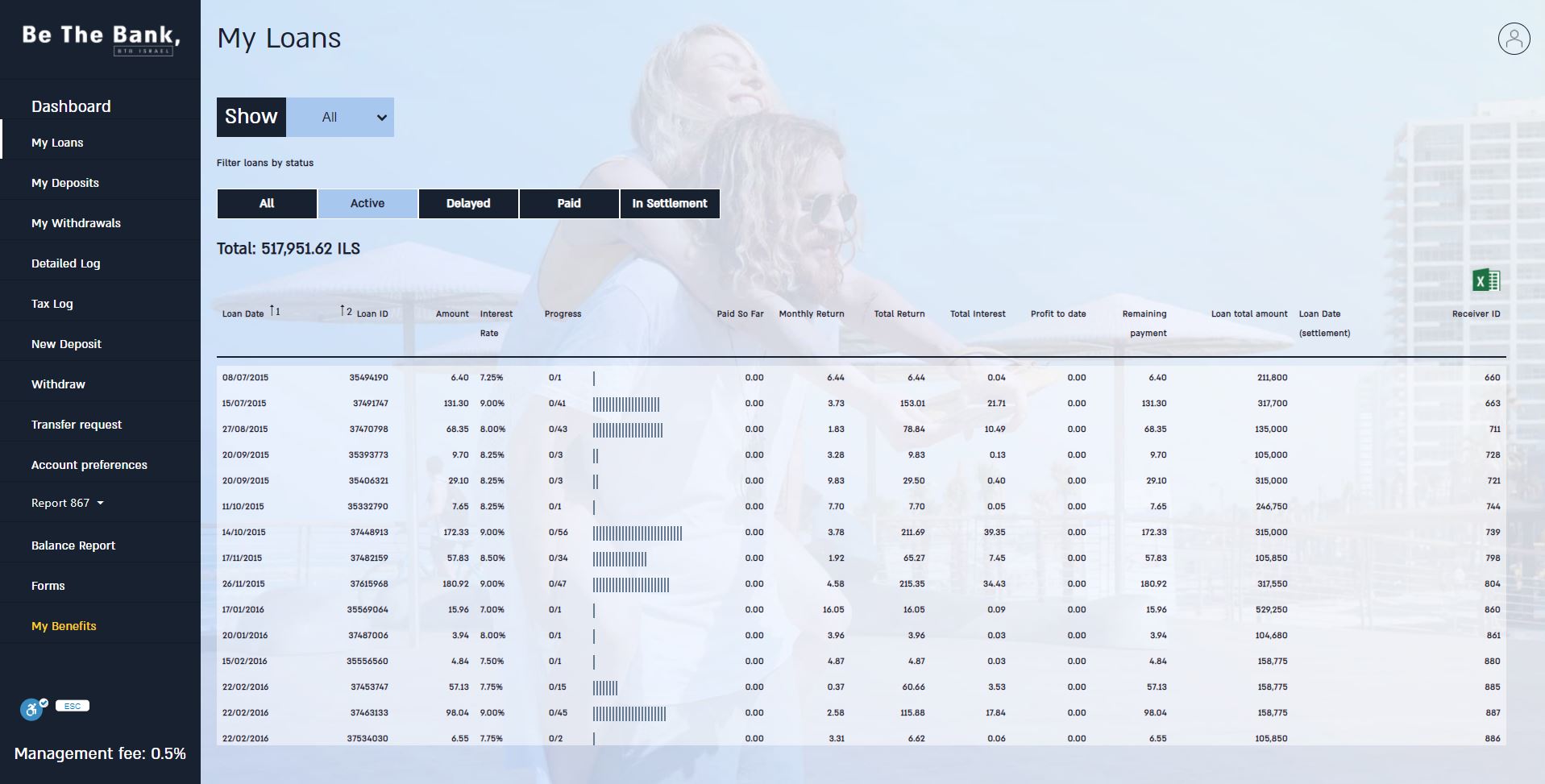 Israel-based peer-to-peer (P2P) lending specialist, BTB, has a business model that has brought annual average returns of 7% in the last seven years with low defaults. Part of its success is a technology platform called B-Match that rebalances and recalculates the investors’ portfolios on a daily basis across all of its loans. 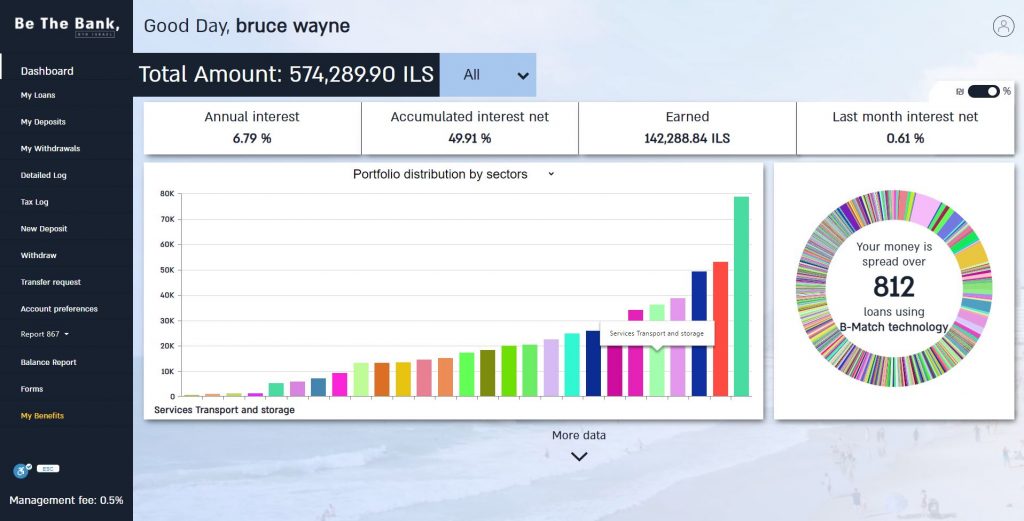 BTB stands for “Be The Bank”, reflecting its intention at launch in 2014 to directly link investors to borrowers on P2P basis, cutting out the banks. It has an interesting, risk-averse model whereby investor funds are spread across all BTB borrowers (currently each investor holds more than 800 different loans in their portfolios).

In addition, 1% of all deposits and returns reside in a mutual guarantee fund which is used to reimburse the investors for the original investment and interest if any borrower defaults. BTB only accepts around nine per cent of its SME borrow applicants as a result of technology alongside a team of analysts to verify their suitability. Therefore, defaults are rare. Add in the mutual guarantee fund and this effectively means zero defaults from the investor perspective. 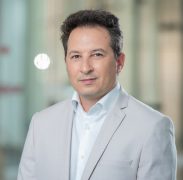 The company was a pioneer in the Israeli market with its P2P offering. “We had to teach the market, it was very challenging, there were a lot of strange and sometimes hard questions to answer, we were – and still are – changing the way people and businesses perceive economics,” says co-founder and co-CEO, Alon Katz. BTB was established with the aim of, on the one hand, resolving the credit crunch of small business owners and, on the other, offering investors a profitable and stable investment with social value. It now has thousands of investors including private individuals, companies, municipalities, investment houses, family offices and even some Kibbutz funds.

Investments can be for any amount; usually loans are up to ILS1 million (€250,000). BTB’s platform spans all aspects of P2P, including tax and fees, with graphical displays of an investor’s portfolio by sector, amount invested (with the ability to have sub-users, such as children), interest, accumulated net interest and investment forecasts of up to 60 years. “From the first day, the investors love what they can see,” says Katz. “As well as excellent customer service that provides investors with the information they seek, we provide lots of data to investors in the digital personal area to be as transparent as possible.” 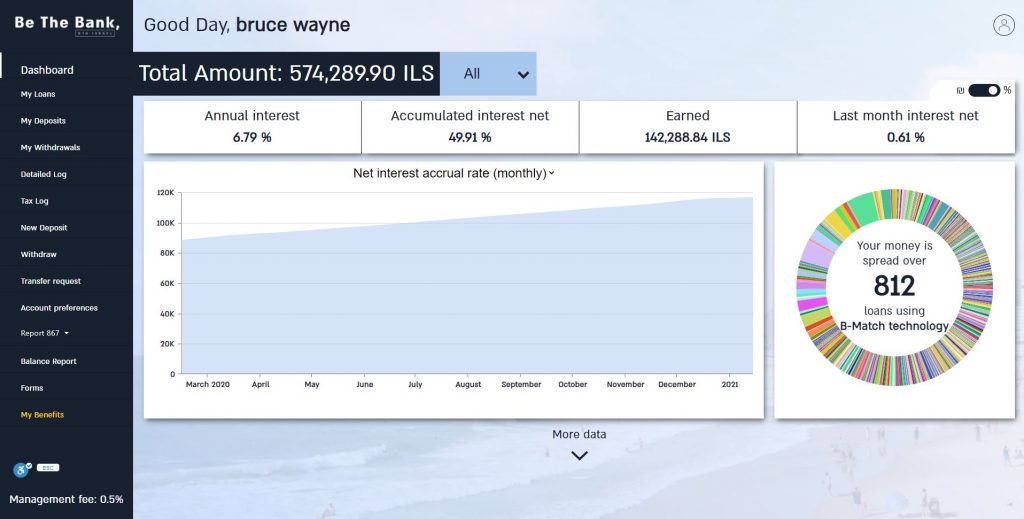 Initially, an investor’s funds would only be allocated to news loans from the day that investor arrived as a client. As a result, sometimes a single loan could form a relatively large proportion of an investor’s portfolio. Despite the very low default rates and the mutual guarantee fund that effectively cancels out the defaults, that situation brought a perceived element of risk. “We wanted everyone to be as safe as possible,” says Katz.

Its technical solution to this issue is called B-Match. This divides all investors’ money dynamically and automatically across all existing loans. The first version of B-Match did this using calculations created by BTB’s staff. The current version, launched in 2020, does it automatically, using an in-built smart algorithm, on a daily basis.

This model means that currently an average of less than 0.1% of each investor’s money is allocated to a single business loan. This amount decreases every day when the B-match system scans the entire pool of existing loans and reshuffles all portfolios to have the smallest portion possible in each of the loans. In this way, it achieves the biggest possible diversification for each portfolio and means every investor, regardless of size, has the same level of return. 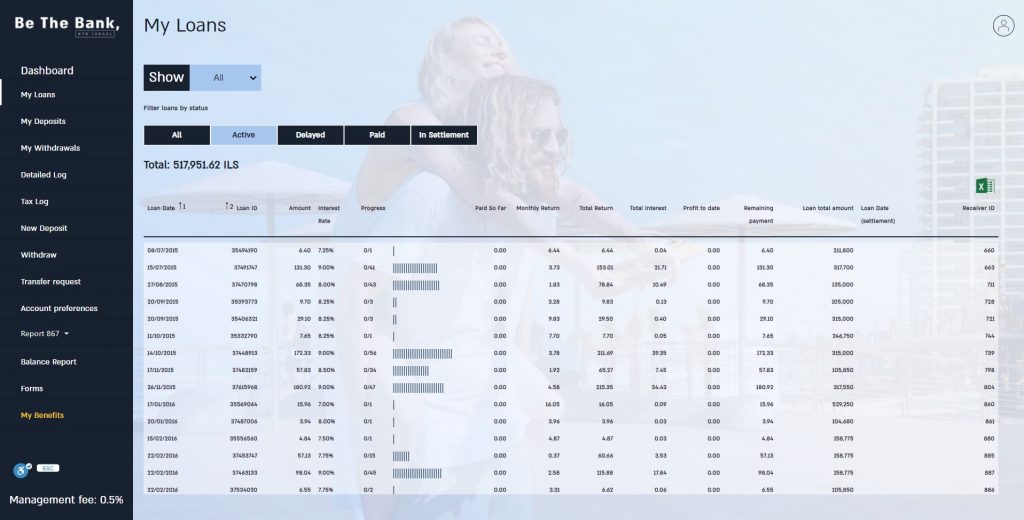 “The use of the B-Match technology has made the investment in the platform safer for every investor, large and small,” says Katz. It is part of the success story that has seen BTB double its business each year since launch and provide its investors with average annual returns of 7%. The platform has gained almost ILS 800 million (€200 million) in investments. That default protection model, which Katz describes as the “fifth line of defence” after all the others including having a guarantor for each loan, means BTB can boast a 100% rate of loan repayment. Despite the many challenges of 2020, BTB’s default rates at the end of the year were lower than at the end of 2019.

BTB’s team of 30 staff comprises specialists in risk assessment, legal and regulatory compliance, government relations, IT, marketing and other areas. There are around 600,000 SMEs in Israel and this number is increasing very fast, says Katz, so there is plenty of scope for further growth in its domestic market. However, “what we did here in Israel, we could do anywhere” with what he feels is a unique business model. So international expansion is planned. “A few countries are in our sights now, it won’t be tomorrow, but it is not so far ahead.”

CLICK HERE TO READ THE FULL BANKING TECH AWARDS WINNERS SUPPLEMENT, IT’S FREE AND FEATURES SOME OF THE MOST IMPACTFUL AND INNOVATIVE PROJECTS, PRODUCTS, SERVICES AND PEOPLE IN THE BANKING TECH/FINTECH SPACE IN 2020!