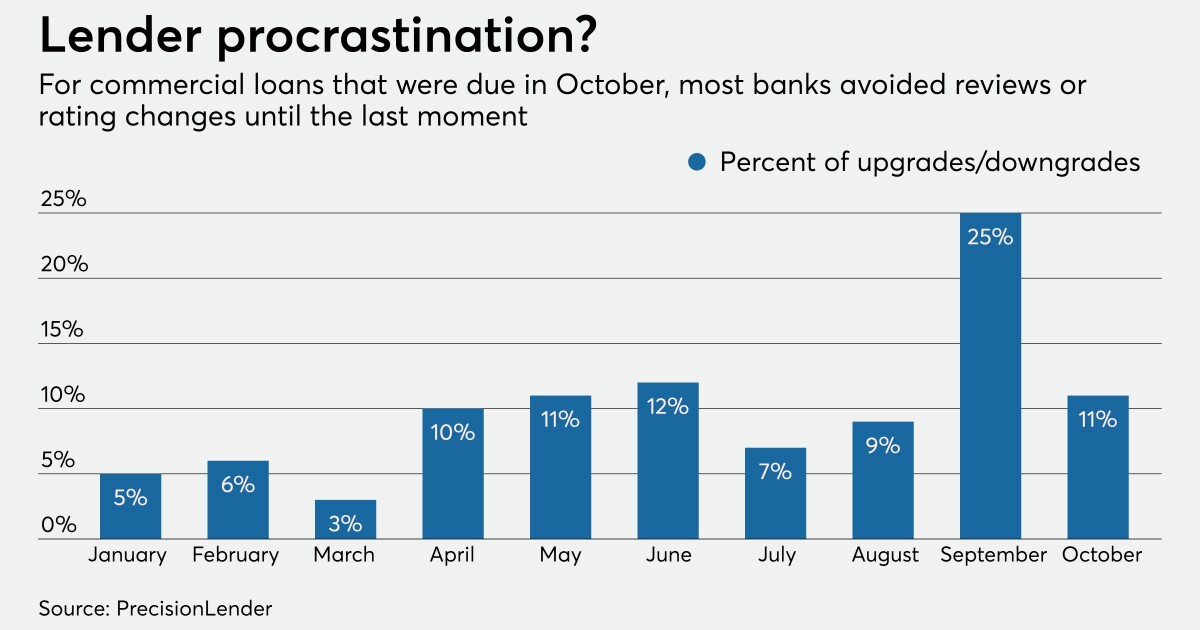 Washington Trust Bancorp in Westerly, R.I., and Allegiance Bancshares in Houston say they have developed procedures to continuously assess the financial health of their commercial credits, while Israel Discount Bank of New York is scouring its loan book for early warning signs.

Those efforts also give lending officers an opportunity to talk with borrowers.

“The key is contact with the customer,” Steve Retzloff, Allegiance’s CEO, said during a virtual roundtable hosted recently by PrecisionLender. “You actually talk to them. … We try to get the pulse of each one by having that conversation.”

While that approach makes sense, most banks continue to evaluate the status of credits during an annual review or as renewals near, said Gita Tolleson, a senior vice president at PrecisionLender. Nearly half of the ratings changes for loans up for renewal in October were made within three months of maturity.

“Banks are not getting out ahead of these rating actions as fast as they should,” Tolleson said during a presentation.

“People are still generally waiting around until the last minute,” she added. “We’re not seeing measurable improvement in terms of the lead time. It may be easier said than done. Going through an entire credit review may be a little bit daunting.”

The process can flag problematic loans that might have been missed until too late under the traditional rating system.

“We change the color depending on events,” Hagerty said during the virtual roundtable. “If events occur to precipitate a downgrade, that happens within that month.”

The $6 billion-asset Allegiance created a rubric in the third quarter to assess more than 90% of its loan portfolio. The process requires the company’s roughly 120 lenders to ask borrowers to complete a 12-question survey that covers topics such as revenue trends, cash on hand and contingency planning.

“We created a [system] to determine whether to downgrade the credit,” Retzloff said.

Allegiance’s lenders can opt to hold off on a downgrade even in the face of concerns, but they have to get a senior officer to sign off on the decision.

Another way to gauge the health of loans is to scrutinize borrowers’ behavior. Banks are tracking actions such as large, sudden draws on credit lines or deposit accounts — viewing abrupt liquidity needs as a potential sign of distress.

The $10.7 billion-asset IDB Bank has been looking for red flags since March. It has created a scorecard to measure usage rates and transactional behavior, among other things, said Jason Goldberg, head of sales in the commercial bank.

“Anything to get lenders in front of the clients” is helpful, Goldberg said during the PrecisionLender discussion. “We’ve also been a little bit aggressive in terms of the downgrades.”

Bank of Japan lines up $6bn in dollar ammunition

Why I Upgraded to a Premium Travel Credit Card in the Middle of a...