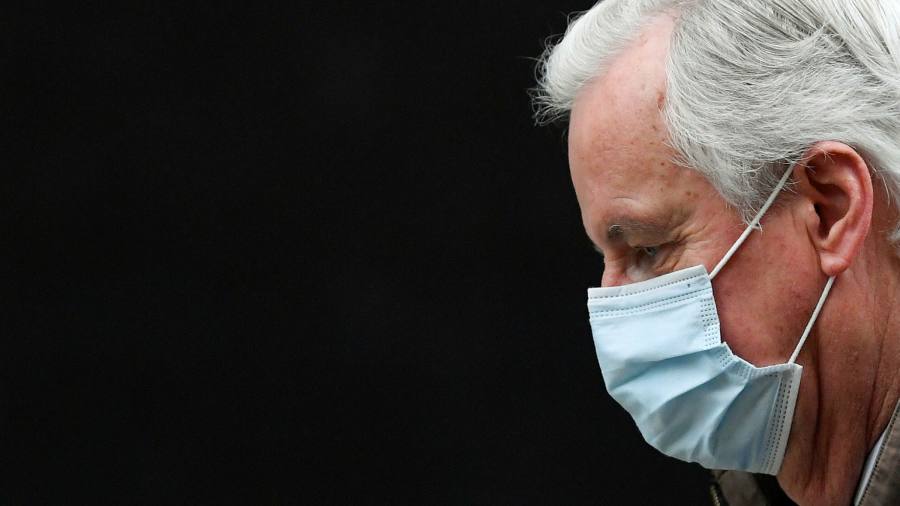 Brexit talks roll on this week as the still divided EU and British negotiating teams seek to ratify an agreement ready for January 1.

The talks are bogged down over fishing rights and on securing “level playing field” guarantees for business, as well as the question of how to enforce any deal.

Opec members will sit down with Russia on Monday for a two-day meeting against the backdrop of a month-long oil rally.

While the cartel could push ahead with reducing its curbs, or even decide to cut a little more for a few months to help underpin the price recovery, most analysts expect Opec to stand pat while the market is trending in the right direction.

UK prime minister Boris Johnson faces a tough House of Commons vote on Tuesday. A rebellion of as many as 70 Tory MPs are sceptical of the Covid restrictions and are asking for more evidence regarding the system efficiency.

England returns to a tiered system of Covid restrictions when lockdown ends on Wednesday.

Eurozone finance ministers will meet virtually on Tuesday to discuss taxation and budget matters as well as the Italian G20 presidency in 2021.

EU health ministers meet on Wednesday do discuss the pandemic. Policymakers are preparing to relax Covid-19 restrictions before Christmas but with caution. Ursula von der Leyen, European Commission president, said: “This time expectations have to be managed.”

The OECD on Tuesday presents its global economic outlook, with updates on the impact of coronavirus on the economy and projections on output, employment, prices, fiscal and current account balances.

US nonfarm payroll figures will be the big data point of the week on Friday while the eurozone has inflation figures due on Tuesday.

On the companies side, Salesforce and Zoom report this week when investors will learn if the pair continue to ride the wave of high earnings brought by homeworking.

London’s FTSE 100 index will undergo its latest quarterly reshuffle at the close of trading on Wednesday. Analysts predict home emergency insurer Homeserve will be the probable faller, with hedge fund manager Pershing Square and engineer Weir Group seen as the leading contenders to replace it.

It will be a very quiet week for earnings reports, but analysts will be looking out for Salesforce’s third-quarter earnings on Tuesday. The US company was in the news last week as it is in talks to buy workplace communication software Slack.

Another company that has performed well thanks to homeworking is Zoom. Its second-quarter trading update in September left investors positively surprised by the results, which caused a 25 per cent leap in Zoom’s shares, and analysts will be looking for more of the same on Monday.

Canada’s six biggest lenders — Royal Bank of Canada, Toronto-Dominion Bank, Bank of Nova Scotia, Bank of Montreal, Canadian Imperial Bank of Commerce and National Bank of Canada — are expected to post a drop in fourth-quarter profits through the week.

US Federal Reserve chair Jay Powell will be in the limelight when he testifies, along with treasury secretary Steven Mnuchin, before the Senate Banking Committee on Tuesday and a day later before the House Financial Services Committee, in a quarterly appearance to discuss the CARES Act.

The US Treasury has recently decided not to extend some of the emergency lending tools set up by the Fed at the beginning of the pandemic.

The Bank of Israel is set to keep its benchmark rate at 0.1 per cent on Monday.

Australia’s central bank is expected to have a quiet gathering the next day after cutting rates to fresh lows at its November meeting.

It is likely to be the same story for the Reserve Bank of India on Friday, which is widely expected to keep benchmark rates unchanged, as will Poland when it meets on Wednesday.

Friday’s non-farm payrolls report will provide the latest monthly update on how the US labour market is bearing up under the second wave of coronavirus infections.

A consensus forecast from economists polled by Reuters points to US employers adding 500,000 posts in November, compared with 638,000 in the previous month’s report.

October’s data beat forecasts, but fresh restrictions across the country since then have reined in expectations.

Weekly initial jobless claims figures are due on Thursday. Last week’s data added to the gloomy picture, rising to 778,000, the first consecutive weekly increase since July.

Eurozone inflation figures on Tuesday are expected to confirm a fourth consecutive month of deflation, piling further pressure on the European Central Bank to step up its stimulus next month.

Investors are looking to the ECB to respond to the faltering recovery as Europe grapples with a second bout of Covid-19 infections. The central bank’s minutes last week cemented those expectations, with policymakers concluding the outlook is “bumpier than previously projected”.

China’s purchasing managers’ index report on Monday will give the first official reading of the economy’s momentum in November, with regional manufacturing gauges the next day showing how well factories are coping.

Turkey will again be in focus after sweeping economic reforms were introduced following the resignation of President Recep Tayyip Erdogan’s son-in-law Berat Albayrak as finance minister.

Analysts forecast the economy will have grown 5 per cent in the third quarter after a 9.9 per cent contraction in the second.

Turkey also has inflation data on Thursday, which is expected to show prices rose by about 13 per cent in November.

Canada’s GDP data on Tuesday is likely to reveal a third-quarter rebound that already appears to be stalling.

Brazil’s third-quarter growth data on Thursday is forecast to have grown at a record 9 per cent compared with the second quarter, which was the worst on record, contracting 9.7 per cent.

Australia’s third-quarter GDP numbers on Wednesday are set to show that a recovery from recession has begun.

Japan has production and retail sales data on Monday, while capital spending figures on Tuesday will be used to revise third-quarter gross domestic product figures.

China’s biggest chipmaker warns of delays due to US sanctions