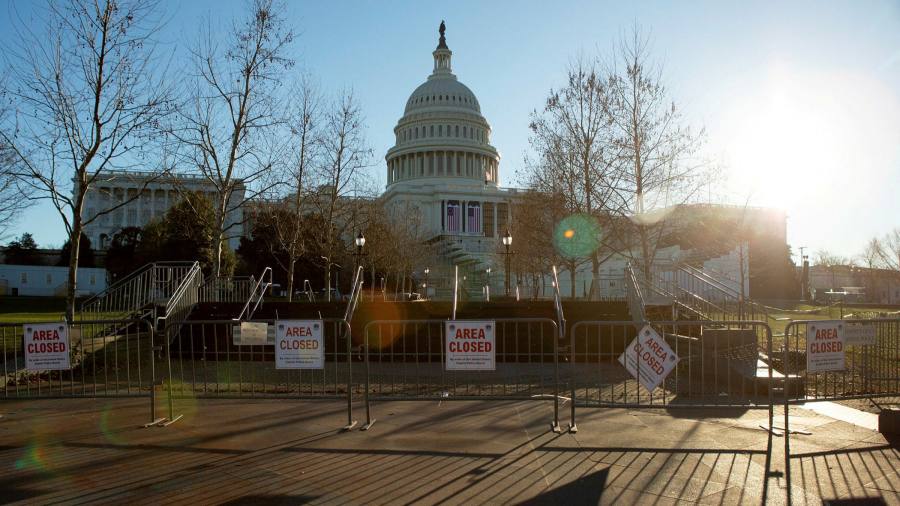 The week begins with the aftermath of the US riots in Washington still being felt.

Democrats will on Monday launch a second attempt to remove Donald Trump from office when they introduce articles of impeachment in the House of Representatives over the rampage on Capitol Hill by the president’s supporters.

Democratic Congressional aides said they had gathered more than 170 signatures of support for impeachment in two days — a sign of the anger felt in Congress at the pro-Trump mob that stormed the Capitol building earlier this week.

US data will be under close scrutiny this week after last week’s jobs report revealed the US economy shed 140,000 posts in December, leaving the unemployment rate at a stubbornly high 6.7 per cent and exacerbating fears that the new coronavirus surge is stalling America’s recovery.

Wednesday’s US inflation figures will be closely watched as investors are braced for higher rates in 2021. They expect the US economy to recover after the positive vaccine news and the announcement last week that the Democratic party had secured control of the government.

China also has some key data out this week that are expected to point to its continuing economic recovery.

The week starts with the consumer electronics show, while things will be rounded off at the weekend with the election of Angela Merkel’s successor at the top of Germany’s Christian Democratic Union party.

In between, for the corporate side, three of the big US banks kick off the fourth-quarter earnings season on Friday.

Up to 200,000 visitors usually spend the week in Las Vegas Strip scoping out potential tech breakthroughs, but this year the four-day annual consumer electronics show, which begins on Monday, will be entirely virtual.

Touchless or voice-based technologies are expected to play a big role, alongside “smart home” accessories, wellness solutions and entertainment gizmos.

The Consumer Technology Association, which hosts the event, is planning a “Covid-19 State of the Union” to educate attendees on vaccines and treatments. Another panel will focus on using artificial intelligence to improve healthcare, while a third looks at how to reimagine the future of education.

For automotive companies, CES has in past years been an enormous proving ground to demonstrate their resilience against the encroachment of tech giants such as Apple and Alphabet.

This year Mercedes plans to focus its keynote on its latest “infotainment” screen, promising it will be “the next chapter in interaction between vehicle and user”.

General Motors chief executive Mary Barra and other executives are expected to provide details of the carmaker’s plans to introduce more than 1m electric vehicles globally by 2025.

The Christian Democratic Union, Germany’s biggest political party, will elect a new leader on Saturday, with the winner standing a good chance of succeeding Angela Merkel as chancellor when she steps down next year after 16 years.

The contest is a three-horse race between Friedrich Merz, a conservative, Armin Laschet, a moderate, and Norbert Röttgen, one of the party’s leading foreign policy experts.

A strong end to 2020 has paved the way for America’s top banks to buy back more than $10bn of their shares in the first quarter, as the loan losses of the pandemic year recede and capital markets fire on all cylinders.

The top Wall Street banks are expected to post fourth-quarter net income about 10 per cent below 2019’s level and revenue about 5 per cent lower year on year, based on consensus forecasts compiled by Bloomberg.

The high points will be a continuation of the capital markets boom that powered earnings in the second and third quarter, and better performance on credit.

Delta Air Lines is likely to reflect the steep fall in demand for air travel during the pandemic and report its first annual loss in more than a decade.

Christmas trading reports from outlets such as Tesco, Primark-owner Associated British Foods and JD Sports will be in focus in the UK as the retail theme continues.

Last week several UK companies reported a boost from pandemic trading, with many benefiting from increased spending on in-demand items during lockdowns.

There will also be more updates from more housebuilders after Barratt Developments underlined how the sector had emerged as one of the winners in an economy blighted by the pandemic with record home sales last week.

India: CPI (Dec) This release is expected to see inflation fall back within the Reserve Bank of India’s target range of 2 to 6 per cent.

US CPI (Dec) Inflation is expected to rise 0.4 per cent month on month and 1.3 per cent year on year.

Eurozone industrial production (Nov) The month-on-month figure is likely to remain flat, taking the year-on-year reading to minus 3.4 per cent.

China trade balance (Dec) Another strong month is expected for exports, with a rise of 15 per cent forecast, compared with the same period a year earlier. In November exports leapt by 21 per cent year on year — their highest growth rate since February 2018. Imports are expected to show a 5.7 per cent year-on-year rise, following an increase of 4.5 per cent the month before.

US initial jobs data The number fell for the third consecutive time last week, but remains near 800,000 as Covid restrictions continue to bite.

Germany full-year GDP Europe’s biggest economy is expected to have contracted by 5.2 per cent in this first reading for 2020, the most since the 2009 financial crisis.

UK RICS house price balance (Dec) The housing market is expected to continue to stand out as the broader economic recovery falters, helped in large by the stamp duty holiday.

US retail sales (Dec) Investors will be on the lookout for a third consecutive month of declines. November’s figure fell 1.1 per cent, the biggest fall in seven months, as the pandemic continued to weigh on consumer activity. The drop was far steeper than the 0.3 per cent fall forecast and followed a 0.1 per cent dip in October.

UK GDP and trade (Nov) The data will provide a first take on the economic damage caused by the reintroduction of the full lockdown in England in November. Growth is forecast to fall 4.8 per cent, the first contraction in seven months.

UK economists’ survey: recovery will be slower than in peer countries

Market questions: should US investors prepare for higher inflation?

How to Find Yard Sales Near You