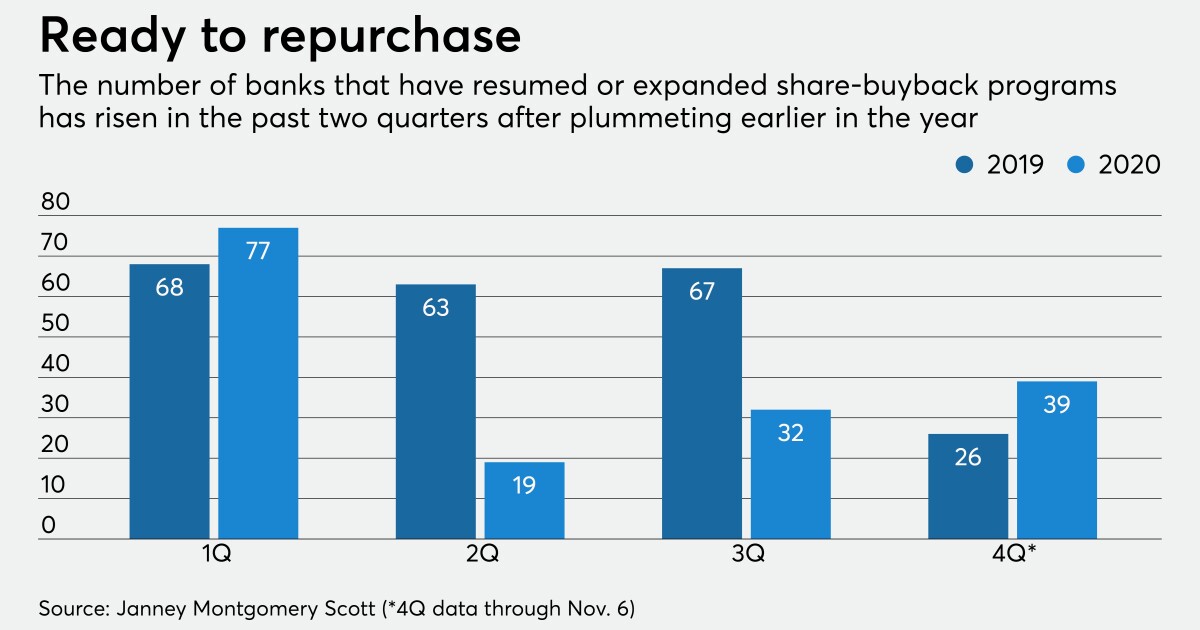 Share repurchase programs, shelved by many banks during the earliest days of the coronavirus pandemic, are gaining momentum among smaller banks.

While the biggest banks are barred by the Federal Reserve from buying back stock — a move aimed to ensure they have ample capital to weather a prolonged downturn — more small and midsize banks are reentering the market.

As of Nov. 6, nearly 40 banks have announced renewed or expanded buyback plans this quarter, an increase from the 32 that revisited buybacks a quarter earlier, according to data compiled by Janney Montgomery Scott.

Repurchase announcements provide no guarantee of activity, and third-quarter data is not yet available, but industry experts expect buybacks at financial firms to top the roughly $8.3 billion in volume that occurred between April and June. That amount represented an 82% decline from a quarter earlier, according to Standard & Poor’s.

Volume should be “a tick better” in the third quarter, said Howard Silverblatt, a senior index analyst at S&P. The fourth quarter is less certain and “remains contingent on the economy, which is contingent on the COVID-19 recovery.”

A willingness to revisit plans to repurchase stock is typically seen as a signal that companies feel as though their shares are undervalued. For banks, it also can be seen as a sign thar credit exposures are manageable and capital levels are adequate. They also reduce shares outstanding, providing a mathematical lift to earnings per share.

Bank stocks have been under pressure, reflecting investor concerns about tepid loan demand, pressure on net interest margins and exposure to sectors that were harmed by the pandemic. Despite a recent stock market rally after the election and news of a potential coronavirus vaccine, the KBW Nasdaq Bank Index still finished Monday down about 20% so far this year.

“We view select buybacks as an opportunistic use of capital and technically supportive of the stocks, particularly in a volatile market,” said Christopher McGratty, an analyst at KBW.

Though earnings at many banks have taken hits because of higher loan-loss provision, most have strong capital ratios and pandemic-related loan deferrals are steadily declining.

“Our appetite is strong” for buying back stock, Robert Franklin, chairman and CEO of CBTX in Houston, said during the $3.8 billion-asset company’s quarterly earnings call. “We’re in [the market] every day, and we’ll buy as much as we can.”

CBTX in early September resumed a plan, suspended six months earlier, that lets it buy back up to $40 million in common stock.

“Obviously, given the caveat a lot of this is very dependent upon the external macro environment and how that all plays out, but sitting here today, we feel very confident in being aggressive in the near term,” Rodger Levenson, the $13.8 billion-asset company’s chairman and CEO, said during a recent earnings call.

“One of the reasons we like buybacks … is its optionality,” Levenson added. “It gives us the option at any time to respond to opportunities or challenges and redivert that capital to address those situations. … Nothing on that front is obvious right now, so buybacks are where we’re headed.”

Given the pandemic and the Fed’s continued concern about capital levels at big banks, Levenson said it was important to make sure regulators were on board with the buyback plan.

The bottom line is that banks are increasingly confident in their ability to navigate the next few quarters.

With “strong capital levels, the robust allowance for credit losses [and] improving credit trends in our model built for the future, we’re going to resume our share buyback program immediately,” Jack Kopnisky, president and CEO of Sterling Bancorp in Pearl River, N.Y., said during the $30.6 billion-asset company’s earnings call.

“We have about a little over 16 million shares authorized to do buybacks, and we’re confident that the board would grant us more if we find more opportunities,” he added.

How Australia brought the coronavirus pandemic under control

Hackers Tried to Get 5 Credit Cards, 3 Loans and Unemployment With My ID