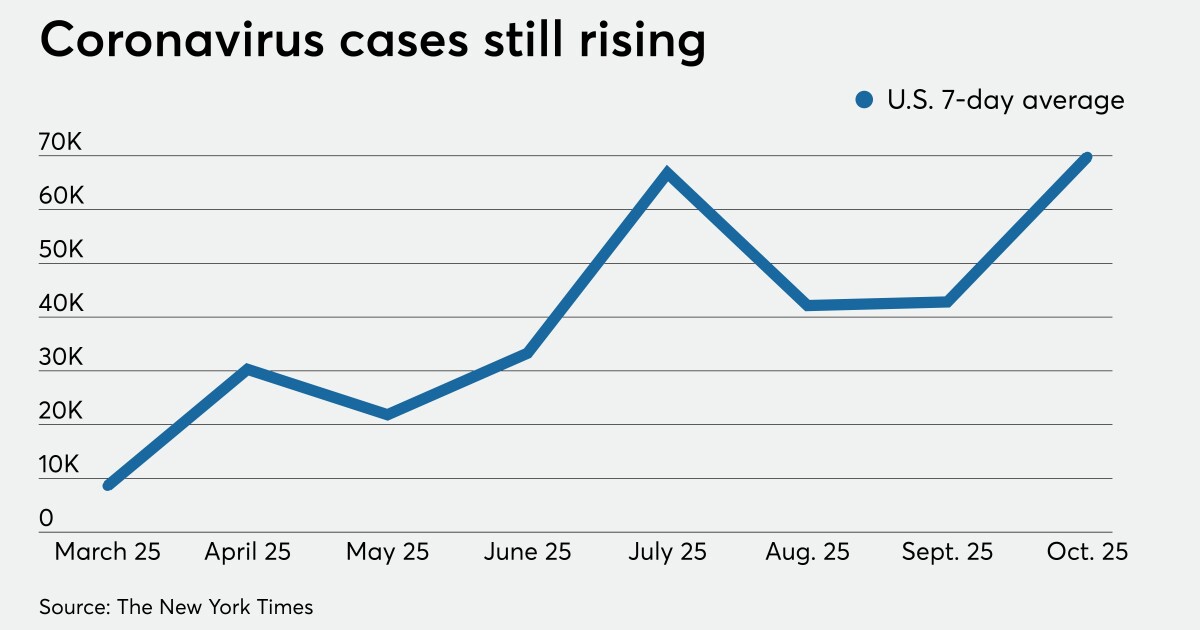 Hoosier Hills Credit Union in Bedford, Ind., has elected to preemptively close all of its branch lobbies and move to appointment-only service beginning Wednesday as the number of coronavirus cases rises across the state.

It could be the first of many similar moves at banks and credit unions across the country.

According to data from the New York Times, on Oct. 25, COVID-19 diagnoses in Indiana were up 52% from two weeks prior, while deaths were up 68% and hospitalizations had risen 35%. By comparison, cases nationally were up 32% over that same period, while deaths rose 12%. 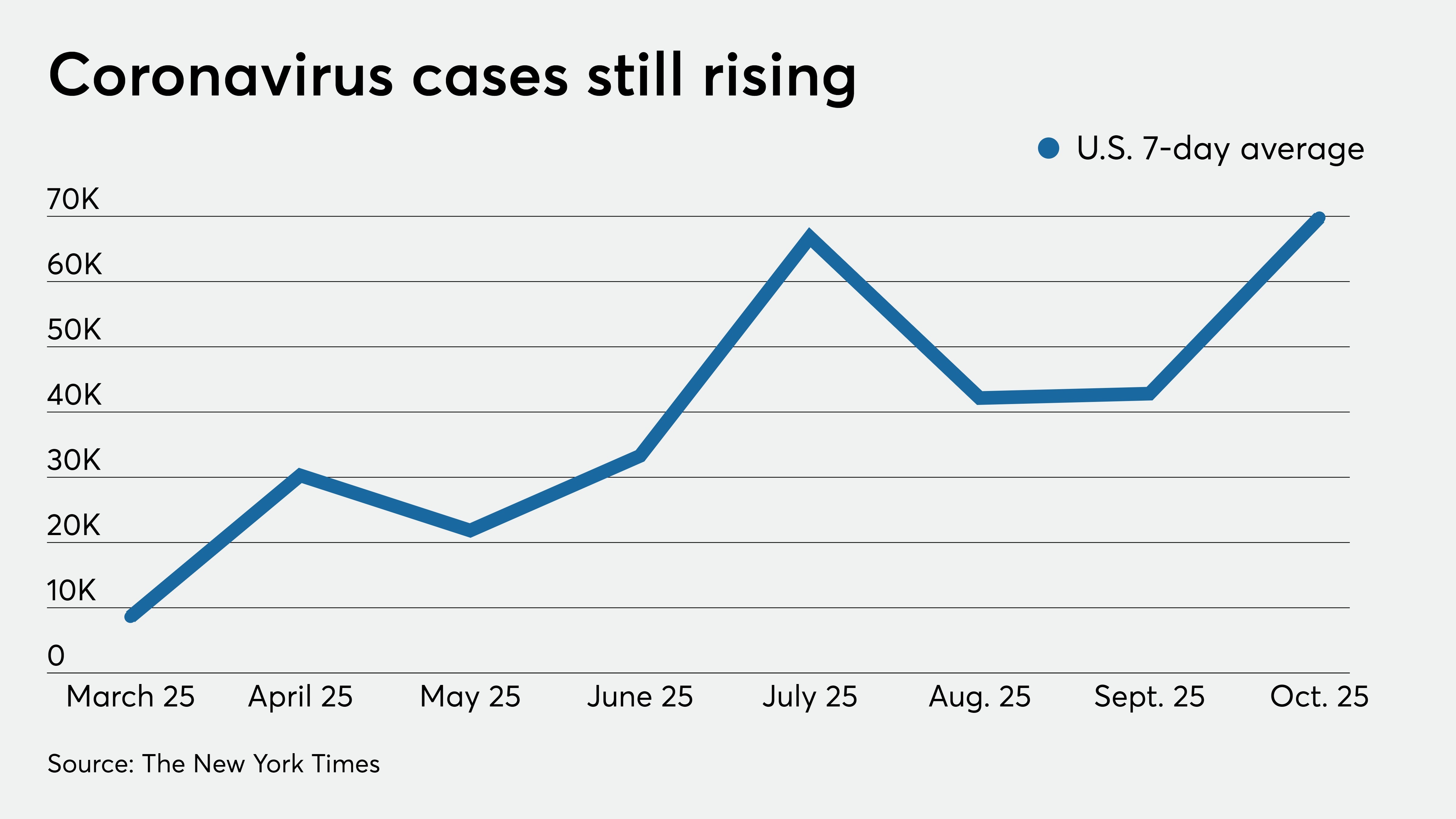 “We’re just trying to be a little bit more proactive,” explained Nan Morrow, chief marketing officer at the $693 million-asset institution. “The numbers are going up in most areas of Indiana. We have branches in five different counties in Southern Indiana and many of those communities are seeing a spike in positive COVID numbers, so we’re trying to get a jump on things, if you will, and proactively look at it in a forward manner so we can keep our members and our employees a little bit safer and not have that exposure.”

Hoosier Hills will still serve members by appointment, as well as at drive-thru lanes, over the phone and via digital channels.

Banks and credit unions across the country shuttered their lobbies in the spring and moved to appointment only when the pandemic first became widespread, but in many instances those closures were the result of mandates from state and local officials. Most institutions eventually reopened, but branch access is different everywhere.

Some have maintained their appointment-only policies, while others have reopened for general access. Some institutions have also opened for their own members but restricted access for members of other credit unions who utilize shared-branching services.

Tropical Financial Credit Union in Miramar, Fla., initially reopened lobbies but closed them again after cases spiked locally during the summer. Amy McGraw, the credit union’s VP of marketing, said the current plan is to reopen most branches to limited traffic – no more than 4 members at once – starting Nov. 16, while also continuing to offer appointments.

“We are being very cautious as kids are going back to the schools in hopes we won’t go backward and have to close again,” McGraw said in an email Monday.

It’s unclear exactly how many credit unions have fully reopened and how many are by appointment only. CO-OP Financial Services, which operates the nation’s largest shared-branching network, does not have data on those figures.

“Full reopening isn’t a reality in a lot of places and we’re absolutely hearing anecdotal reports of people closing again,” said Steve Reider, CEO of the consultancy Bancography. “One of the reasons why institutions may be quicker to close branches this time around is because they’ve gotten skilled at working with it and working through it. We’ve gotten call centers and digital channels stronger, and it’s not ideal but I do think there’s a safety-first mentality that says, ‘We can live with a two-week closure because we’ve learned how to work around it.’”

Hoosier Hills has is targeting a Nov. 16 reopening but Morrow admitted that it may not be possible to meet that goal.

“In all of our communities we’ve said we’ll reevaluate prior to that and see what we think,” she said. “It really will be based on whether the numbers start going down or keep going up.”

“We’ve been talking with folks in each primary location where we have service centers and what we were hearing is their hospital beds are getting full again with COVID patients,” she added. “That has not been the case for a while, so there’s stress in the communities on medical capacity. We’re just looking ahead to see how we can help the situation.”

Dr. Kelly Reynolds, an environmental microbiologist in the Mel and Enid Zuckerman College of Public Health at the University of Arizona, acknowledged that more lockdowns are probably coming in the weeks and months ahead, citing curfews in Europe and a voluntary stay-at-home order in El Paso, Texas. The good news, she added, is that mortality rates are lower now than they were in the spring, indicating doctors have gotten better at treating the virus and that communities are less likely to “get into danger zones where hospitals get overrun.”

While the epidemiological curve shows conditions improve when communities shut down, said Reynolds, the benefits may be limited if only some businesses in a community close their doors. Employees at a particular business will be a bit safer, but that will be countered by the fact that consumers can still continue most other activities unhindered, including shopping and dining out.

In the meantime, Hoosier Hills is not expecting the move back to limited branch access to affect its staffing, in part because many employees are still working remotely. But net income has dropped this year — down about 9% year-over-year as of Sept. 30 — and Morrow said year-end revenue likely will not meet initial projections for 2020.

Reider said that’s a scenario many credit unions are dealing with, particularly with reduced branch traffic.

“There’s only three ways in the industry you can make money: you can sell more, spend less or reduce charge-offs,” he said. “Clearly, the new membership procurement pipeline…gets truncated without the outreach of the branch network.”

Morrow said limiting branch access has had a short-term impact on revenue, “but in the long run we’ve done what’s best for our members, and we think that will ultimately be what’s best for us.”

And management is girding itself for the possibility of a closure that lasts well beyond Nov. 16.

“I think we have to keep in mind that that is a possibility,” said Morrow.

She added, “We hope this second closure is much more temporary than the first.”

What should I ask Dana Gioia? – Marginal REVOLUTION