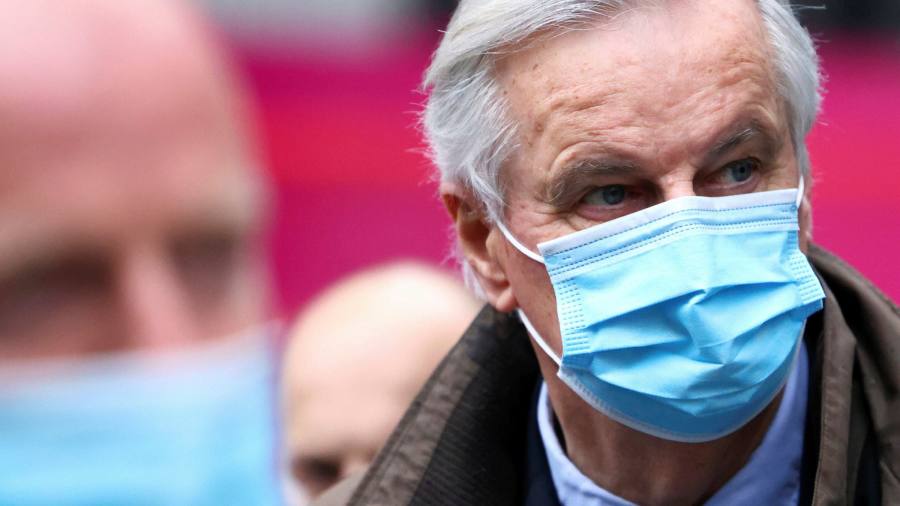 As so often with Brexit negotiations, the two sides take one step forward and then take another back — as was demonstrated this week by the intervention of several EU member states worried that Michel Barnier was taking too many risks in pursuit of a deal.

France, Denmark and the Netherlands led the resistance, requesting that Mr Barnier, the EU’s chief Brexit negotiator, brief ambassadors on the progress of the talks after they became nervous that Ursula von der Leyen, president of the European Commission — perhaps in concert with Berlin — was pushing for a deal by the end of this week “whatever the cost”.

Time is now very tight, and much will depend on whether Mr Barnier brings positive news when he returns to Brussels this weekend that persuades the doubters that a thin deal is worth doing with the UK.

The same old sticking points have been endlessly elaborated these past six months, but there are now some signs of how far Mr Barnier has moved in order to get a deal, and which explain this week’s sharp tap on the brakes from some sceptical EU members.

One example is the apparent acceptance by Mr Barnier, according to EU diplomats familiar with the talks, that the UK will not have an “ex ante” state aid regulator — as the EU does in its own state aid regime — that can intervene in subsidies before they are handed out.

The UK government has always been adamant that given it is now an individual sovereign state, it no longer needs to mirror an EU state aid regime that was designed to ensure free and fair competition in a single market made up of 27 independent nation states. Canada, ministers are quick to point out, does not have an “ex ante” regulator.

State aid has long been a sticking point in the talks because the EU is concerned that its industries could be undercut by UK subsidies and, without such a regulator, have no means by which to seek timely redress. An “ex post” system that allows complainants to seek redress after a distorting subsidy has been handed out risks the legal remedies coming long after the patient is past saving.

This is what worries EU member states, particularly those that trade intensely with the UK, and have to sell the deal to their own publics. As one EU official succinctly put it. “It’s one thing companies dying because of a pandemic; quite another because you’ve negotiated a rubbish trade deal with the UK.”

But this British refusal to mirror the EU’s “ex ante” system is no longer a deal-breaker, it seems — but only so long as member states do have sufficiently robust alternative routes to seek timely redress.

The focus is now on creating a satisfactory combination of what Mr Barnier in his debrief to EU ambassadors described as a combination of “definitions, principles and binding, workable and operational enforcement” to deliver a deal that still meets his mandate.

The EU has come a long way from demanding “dynamic alignment” on state aid, which explains the jitteriness of some member states, but also sets out a potential path to a deal based on pragmatism and focusing on “remedies” that would give EU member states the confidence to do a deal.

Those sceptical EU states still want non-regression on current social and environmental standards as a minimum floor and a nimble “cross-cutting” retaliatory dispute mechanism that allows an aggrieved party on either side to hit back swiftly in a sector where it hurts the other.

All that late-night pizza is there to fuel the race to find a sufficiently robust blend of measures that will satisfy both sides in the respective core interests — the EU’s desire to constrain the UK as much as possible in exchange for “zero tariff, zero quota” access to its single market; the UK to minimise those constraints.

A very delicate balance remains to be struck. Sceptical member states fear that getting it wrong will lead to buyers’ remorse in the decades to come. But if both sides come off their ideological red lines, and focus entirely on remedies and outcomes, they should be able to get there. In any case, the “deal” will evolve over time.

Expect a successful result, if it comes this weekend as some expect, to elicit howls from ultras on both sides. Boris Johnson will have to face down the hardline Brexit caucus in his party, just as Ms von der Leyen may at some point have to isolate French-led opposition to a compromise that some in the EU may still feel breaches red lines.

But as one experienced negotiator puts it, to get there, the overriding focus now will have to be on getting over the line — there will be details that some are unsettled by and do not like — but they cannot get in the way of the overarching objective: to get a deal.

As we tip-toe towards that trade deal, one area where Mr Johnson will be desperate to claim a “win” will be on fish — the bone of much contention during the talks, but surely never an issue that would scupper the deal if agreement was reached on the wider economic partnership.

The political sensitivity of this area was demonstrated this week when it was reported that Mr Barnier had told EU ambassadors that Britain had lowered its demand to reclaim 80 per cent of EU pre-Brexit fishing rights in UK waters. The news, swiftly denied by UK officials, led to accusations of a “Boris Johnson’s Brexit SELL OUT!” in the pro-Brexit tabloid press.

But to put those numbers in perspective, the value of EU fishing rights in UK waters is estimated at about £590m a year — a drop in the ocean when set against total EU-UK trade worth a total of more than £660bn.

Most sensitive is the 6-12 mile zone where the small local boats fish, and are harder to compensate given they cannot go elsewhere, but here the numbers are even more tiddly. According to one internal EU estimate for Belgium, this 6-12 mile sector amounts to 150 boats that catch €5m a year.

And as the FT reported from the Devon fishing port of Brixham this week, even allowing for Mr Johnson’s political need for a “win” on fish, as the chart shows a balance will need to be struck between winning concessions on behalf of those who catch fish, and maintaining favourable market access terms for those who sell it.

Best Tips for Saving for Retirement – At Every Age – NerdWallet