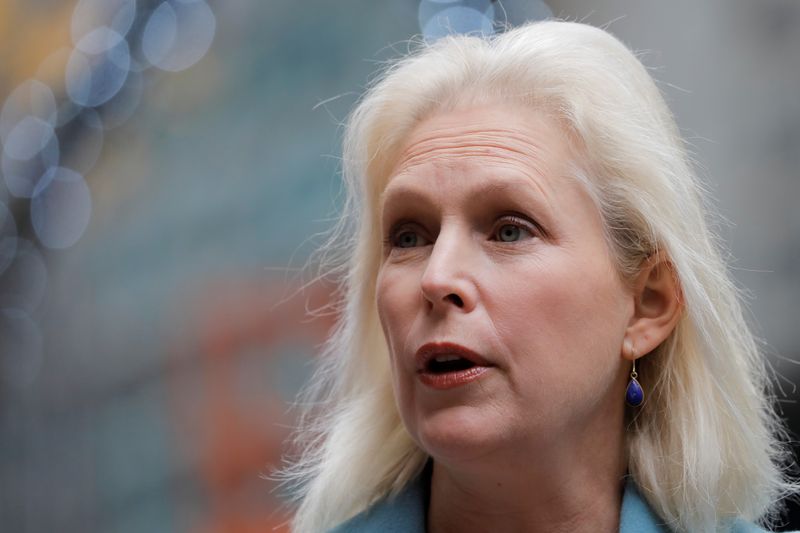 WASHINGTON (Reuters) – Senator Kirsten Gillibrand says she will work with colleagues on legislation giving U.S. troops the same legal protections against discrimination as civilian employees, a move advocates say could be a game-changer for minorities in America’s armed forces.

The effort by Gillibrand, who is expected to lead a Senate subcommittee responsible for U.S. military personnel, follows a 2020 Reuters investigation https://www.reuters.com/investigates/special-report/usa-military-civilrights that showed U.S. troops were far less likely to file racial discrimination complaints than their civilian counterparts.

That is despite data from a long-withheld Pentagon survey https://www.reuters.com/article/us-usa-military-civilrights-exclusive/exclusive-long-withheld-pentagon-survey-shows-widespread-racial-discrimination-harassment-idUSKBN29J1N1 that showed nearly a third of Black servicemembers and a significant percentage of Asian and Hispanic servicemembers experience racial harassment, discrimination, or both. The survey was first reported by Reuters last week.

“Disturbing new data shows that our service members are suffering due to a lack meaningful civil rights protections, while their civilian colleagues in the Department of Defense and across the government enjoy robust rights enshrined in Title VII of the Civil Rights Act,” Gillibrand told Reuters.

Gillibrand, a longtime advocate of women in the military who has championed reforms to address sexual assault in the ranks, added that it was “long past time for Congress to act.”

Title VII of the Civil Rights Act of 1964 bars employers from discriminating against employees on the basis of race, color, national origin, sex or religion.

But the U.S. government has long maintained that military servicemembers are outside the scope of Title VII because they are not technically federal employees, a view upheld by courts. Instead, troops have a separate system to file complaints of discrimination.

Don Christensen, who served as a chief prosecutor for the Air Force, said extending Title VII protections to U.S. troops would be a substantial change that could affect everything from who reviews a discrimination complaint to whether troops can seek monetary damages, as civilians do.

“It would be a big deal,” said Christensen, who has worked to expose discrimination in the military at the Protect Our Defenders advocacy group.

“Right now. There’s no way for military members to get money damages … and there’s no outside review. It’s all done internally.”

It is unclear what prospects such a legislative push would face in the sharply-divided Congress and Reuters was not provided any details on timing or potential Senate co-sponsors.

But any move to change the legal status of U.S. troops reporting discrimination could present an early test for retired Army general Lloyd Austin, who would become the first Black defense secretary if ultimately confirmed by Congress.

Austin, like President-elect Joe Biden, has expressed a commitment to improving diversity https://twitter.com/LloydAustin/status/1349010055094562818?s=20 in the Department of Defense, which is diverse in lower ranks but largely white and male at the top. Still, military policy has long prioritized dealing with disciplinary matters internally, given the unique demands on the armed forces in wartime.

Gillibrand said she hoped for a hearing on the matter.

“I will push for a hearing on this racial justice crisis, and I will be working with civil rights groups and other members of Congress to draft legislation to extend Title VII to military service members,” Gillibrand said.

Although the U.S. military has policies prohibiting unlawful discrimination, U.S. troops are deeply skeptical that filing a complaint in the Military Equal Opportunity system will be worthwhile, Reuters has found. They also fear backlash.

Just 71 sailors formally complained of discrimination in 2019 on the basis of race or color, one-sixth as many as the 404 complaints filed by the Navy’s smaller civilian workforce, for example.

A November memo by the Congressional Research Service, which has not been previously reported, acknowledged that comparing the rates of harassment and discrimination to the number of complaints “could provide an indicator of servicemember trust in the reporting process’s fairness and accountability.”

US backs plan to suspend Covid vaccine patents during pandemic

Want to Buy Ethereum? Here’s What to Consider – NerdWallet