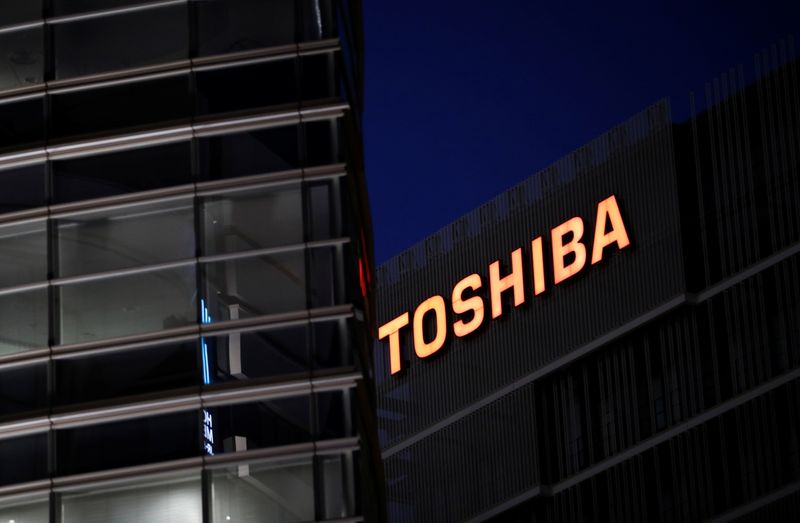 © Reuters. FILE PHOTO: The logo of Toshiba Corp. is seen at the company’s facility in Kawasaki, Japan June 10, 2021. REUTERS/Kim Kyung-Hoon

TOKYO (Reuters) -Four of Toshiba (OTC:) Corp’s independent directors called on Friday for a shake-up of the Japanese conglomerate’s management and board, accusing them of “unacceptable” actions directly against the interests of shareholders.

The call by the four – all non-Japanese – came a day after an explosive independent investigation alleged Toshiba colluded with the Japanese government to pressure foreign investors viewed as “undesirable” by the conglomerate.

The public criticism is the clearest sign yet of the fallout from the shareholder-commissioned report released on Thursday, which has put Toshiba’s management and Japan’s powerful trade ministry under scrutiny and renewed concerns about governance.

“The report made clear that certain members of the management and board took actions that were unacceptable and directly against the interests of our shareholders,” the four directors, Jerome Black, Paul Brough, Ayako Weissman and George Zage, said in a statement.

“We are no longer in support of the full slate of director candidates which were nominated by Toshiba” for the upcoming annual shareholders meeting (AGM) on June 25, they said.

No one at Toshiba was immediately available for comment outside normal working hours.

Earlier on Friday, U.S. proxy advisory firm Glass Lewis urged shareholders at this year’s AGM to vote against the re-appointment of Toshiba board chairman Osamu Nagayama and four others nominated by the company for the 13-member board.

It called the report, “a fairly damning indictment of the effectiveness of Toshiba’s principal oversight body and its ability to credibly represent the interests of all investors”.

In his first official remark since the report was released, Japan’s trade minister on Friday denied his officials directed the adviser to lean on Toshiba’s foreign shareholders.

“Ministry officials have informed me that it’s not true that any request was made to engage with individual investors,” Trade Minister Hiroshi Kajiyama told a regular press briefing.

He said the ministry was awaiting Toshiba’s response to the report.

Bank of Queensland splashes $1bn to challenge Big Four with ME Bank purchase –...