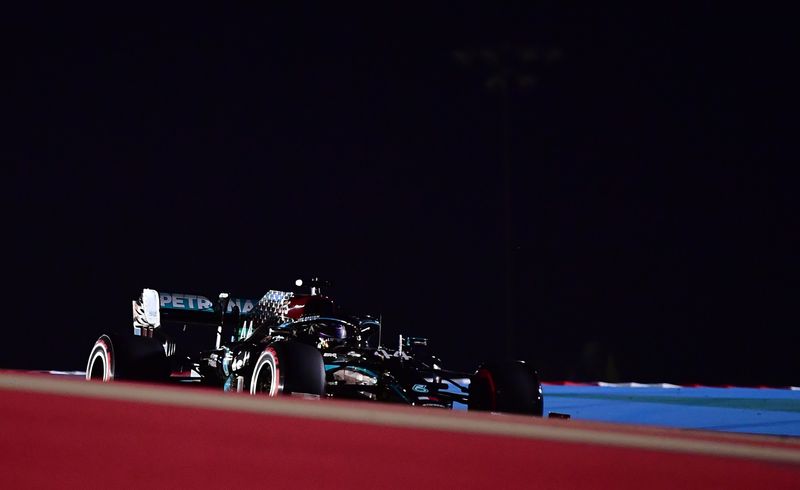 MANAMA (Reuters) – Seven-time Formula One world champion Lewis Hamilton stormed to pole position for the Bahrain Grand Prix with a record lap in Saturday’s qualifying session ahead of team mate Valtteri Bottas who completed a front-row lockout for Mercedes.

The Briton lapped the 5.4-kilometre floodlit Sakhir desert track in one minute, 27.264 seconds, beating his Finnish team mate by 0.289 seconds.

It was the 98th pole of Hamilton’s career and puts him on course to complete a century, with the Bahrain race the first of a season-ending Middle Eastern triple-header.

It was his 10th pole this season and third in Bahrain, which puts him level with Sebastian Vettel as the most successful qualifier at the Sakhir track.

“I think with the pressure a little bit off it was a release to go and drive like that,” said Hamilton, who equalled Michael Schumacher’s record haul of seven championships at the last race, in Turkey.

“I am on the ragged edge, naturally, and it is about trying to find that perfect balance and chipping away.”

Alexander Albon recovered from his crash in Friday’s practice to go fourth-quickest. Running a new chassis, he will line up alongside team mate Verstappen on the second row of the grid.

Sergio Perez was fifth for Racing Point ahead of Renault (PA:) pair Daniel Ricciardo and Esteban Ocon, while Pierre Gasly was eighth for AlphaTauri ahead of McLaren’s Lando Norris.

Daniil Kvyat in the other AlphaTauri rounded out the top 10.

Ferrari (NYSE:), dominant in Bahrain last year when they locked out the top two spots in every session of practice and qualifying, failed to make it into the top 10 this time around. They will start with Vettel in 11th and Charles Leclerc 12th.

Lance Stroll, on pole in Turkey, was only 13th.

The hour-long session was interrupted by a brief halt after a spin for Carlos Sainz. The Spaniard’s McLaren appeared to suffer a locked rear axle under braking for the first corner, which left him stranded at the edge of the track.