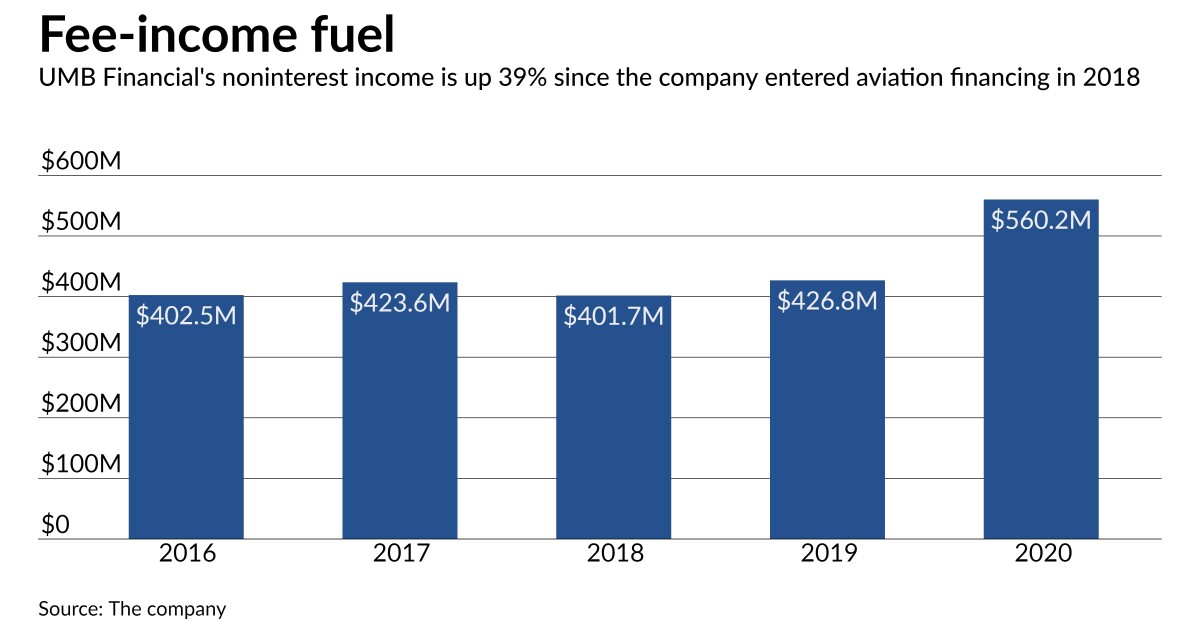 The hunt for fee income in a prolonged period of low interest rates has taken a $33 billion-asset regional bank in Kansas City, Mo., all the way to Ireland.

UMB Financial raised eyebrows this month when it announced its specialty trust business had opened an office in Dublin to facilitate the leasing and sales of airplanes. Its aviation group had grown into a sizable player in a niche industry in the U.S. even before the push into Ireland.

Courtesy of years of tweaks to Ireland’s tax code, roughly $10 billion of the country’s annual gross domestic product is tied to what’s become a hub for leasing and structured financing deals in aviation.

Banks like UMB have reaped huge fees from the business, through which planes change hands between airlines and cadres of private investors looking for deals in an industry that was pummeled by the COVID-19 pandemic. UMB’s aviation group has swelled by 800 clients since bringing on a team of specialists three years ago from a bank in Salt Lake City, another financial center for the skies.

“We’re following our customers there in a sense,” said Mark Flannagan, who heads the group as executive director of specialty trust and agency solutions at UMB. “It’s a nice source of fee income.”

While UMB does not disclose revenue from the group specifically, the business has contributed to a 39% increase in overall noninterest income from 2018 to more than $560 million in 2020. Roughly 35% of UMB’s total revenues came from fees in the fourth quarter, a better-than-expected mix, analysts at Keefe Bruyette and Woods said in a January note to clients.

Generating fee income will continue to be a focus for the industry after the Fed on Wednesday indicated there would be no hikes to its main borrowing rate through 2023.

Flannagan said UMB was lucky to get started on opening the new Ireland office before the pandemic struck. It managed to hire Katherine O’Brien as managing director of its trust and agency services division in Dublin before the borders closed and flights were grounded.

O’Brien had been vice president of treasury at the leasing firm DAE Capital, which acquired the major Irish aircraft company Ansett Worldwide Aviation Services in 2017. Flannagan did his share of the work from his basement office while coordinating with O’Brien half a world away to get the office off the ground.

“If we had not had her in place prior to COVID, this would have been very difficult to do,” Flannagan said.

Part of the work the group does is handling asset-backed securities filled with loans taken out by buyers of airplanes.

Globally, there were $10 billion of deals in this secondary market in 2019, according to a recent report from KPMG. UMB was the trustee on 11 ABS aviation transactions that year, Flannagan said.

Then the pandemic hit.

“The ABS market has been effectively shut to aviation since March, and there are mixed views as to when it will reopen, though there is consensus that initial deals will likely be solely debt-focused,” KPMG’s Head of Aviation Finance Joe O’Mara, in Ireland, said in the report.

UMB managed to close one aviation ABS deal and found other ways — like sale leasebacks — to facilitate transactions as the airline business was grounded, Flannagan said. A source of business going forward, he said, will be from private-equity firms.

These funds have developed a way to invest in Irish holding companies that lease the airplanes they invest in, and, because of certain U.S.-Irish trade agreements, can avoid U.S. taxes on the revenues, according to a 2020 report from consultancy firm Ernst and Young.

There could be more work to do as airlines juggle their fleets once the pandemic wanes and travelers get back into the air. One arrangement could be the use of sale-leasebacks, where an aircraft owner sells the plane to a lender or another party in order to raise capital. The plane is then leased back to the owner.

“There will be some restructuring starting to see investors putting money into funds to acquire aircraft as they see depressed prices,” Flannagan said.

The Irish expansion won’t be the last creative move Flannagan’s team at UMB will make as the bank will continue to be creative coming out of the pandemic.

“There will be some new opportunities outside the aviation area, not in the near future but growing into some additional products,” Flannagan said.

Sony warns it could move factories over Japanese energy policy