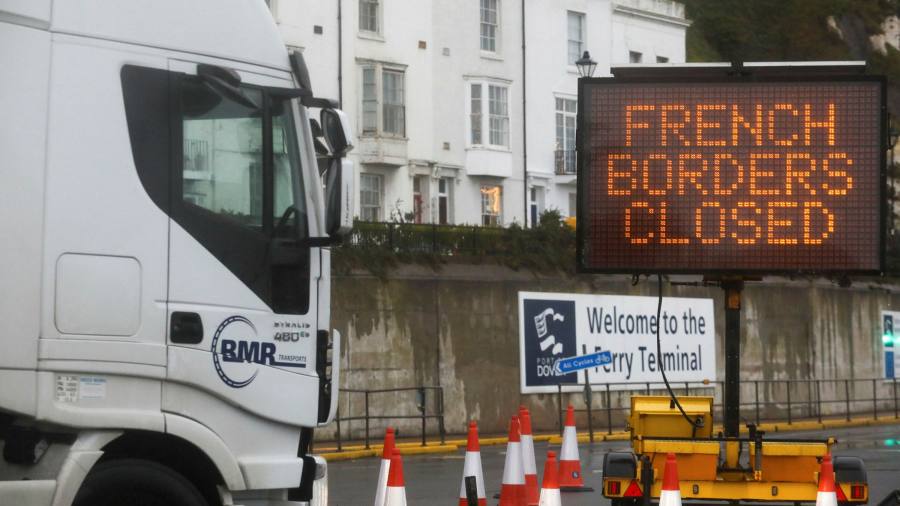 Hello from Brussels — not, thank goodness, London, still less Kent. Today’s main piece below is how the EU looks as if it’s jettisoning its principles to try to jam through an investment deal with China before year-end. There will be one more edition of Trade Secrets this week, including a look back at 2020 and Tit for Tat.

But first, a proposition to think about while we’re waiting for a UK-EU trade deal to happen or not: Covid-19 could just end up doing Brexit a favour, at least presentationally. It’s a thought that occurred while seeing EU countries closing borders with the UK last night to keep the new strain of Covid-19 out. Brexit and Covid-19 deliver quite different short-term economic shocks. The first mainly hits goods trade, whether there’s a trade deal or not, and the second largely domestic services and personal travel. Economically it’s a terrible one-two to have them come simultaneously, whatever the government has sometimes briefed about catalysing supply-chain restructuring by taking both hits at once. However, thanks to the Channel port and tunnel closures, we now have the added element of the pandemic savaging freight transport as well.

UK prime minister Boris Johnson’s popularity will surely (and deservedly) tank because of the impending chaos. However, in the longer term, the public perception of Brexit might actually benefit.

Imagine this scenario. As well as the shutdowns hammering retail and so on, there is chaos at the ports well into the new year. But Covid-19 is a more obvious problem to most people than lorry drivers buried under paperwork, and hence attracts an undue amount of the blame. Several months into 2021, with the Covid-19 wave subsiding, vaccination becoming widespread and lockdowns lifting, the economy starts to recover. The Brexit-related port chaos has probably diminished a bit, if only because some companies stop trying to trade overseas altogether. With the UK being mainly a domestic services-based economy, more people care that the supermarkets are open at all than whether the fruit and veg sections are well-stocked. Schools and pubs reliably being open make the public too relieved to mourn this or that car factory leaving or a slow bleed of City jobs to Frankfurt. Johnson is reviled for mismanaging Covid-19, but the next general election is still more than three years away and he quits before then. By the time of the next election, it seems to the public that Brexit wasn’t actually that bad — and the pandemic (and Johnson) was the real problem.

This is only conjecture, not a prediction, but it would be a savagely ironic outcome if the pandemic obscured the damage of Brexit. If you exclude foreign policy disasters (Iraq, Suez, partitioning Punjab), it’s hard to think of an issue the UK has handled worse since 1945 than leaving the EU. It would be extraordinary if government incompetence in dealing with Covid-19 hid how disastrously it had addressed Brexit. But many madder things have happened this year, and plenty of them were in Britain.

Don’t forget to click here if you’d like to receive Trade Secrets every Monday to Thursday. And we want to hear from you. Send any thoughts to [email protected] or email me at

Brussels’ crafty China deal to get the jump on Joe

So here’s something that caught a lot of people, including us, by surprise. The EU and China’s bilateral investment treaty, talks for which started in 2014, is supposed to be done by end-2020. As such treaties go it’s theoretically quite an ambitious one, covering market access as well as protecting current investments. But trade negotiators have struggled all year, with arguments over enforcement, the aforementioned market access and particularly labour standards. (China is widely reported to be using forced Uighur labour in the Xinjiang region.)

Suddenly, with a few weeks to go, it appears that the EU (specifically Germany) and China have floored the accelerator and are trying to get it done. It might even happen this week. Many of the EU’s community of China-watchers think this is a bad idea, as does the official FT editorial line. So do some in the European parliament, where criticism of China has been growing rapidly.

The critics say a quick deal will compromise principles on human rights and undercut any potential alliance with the incoming Joe Biden administration on pressing China to open up and play by multilateral rules. They have a point, and the clue is in the timing. People who are usually right about these things point out to us that the rush to get things done by December 31 isn’t because of an arbitrarily self-imposed deadline: it’s because the six-month German presidency of the council of member states ends then. After that point it’s harder for Chancellor Angela Merkel to call up other EU heads of government and press them to fall into line. By all accounts, the pressure for a deal within the EU is overwhelmingly from Germany, and the negotiating that really matters is being done bilaterally between Berlin and Beijing.

This is not a good look. With talks at member state and EU level as opaque as usual, who knows what quiet little private deals are being done — a takeover accepted here, a joint venture set up there — to help the deal along? The German export industry has a long history acting as China’s local trade office in Europe and undermining attempts to build common EU fronts against Beijing.

The commission line is that it is expanding free trade by negotiating new market access and, in any case, essentially just matching the US after Donald Trump’s “phase 1” China agreement back in January. That’s a reasonable argument in theory but a weak one in practice. That deal is regarded by many experts who have looked at it closely as a pretty feeble one. It contains purchase agreements for soyabeans and so on which haven’t remotely been met and a bunch of fairly minimal other commitments. One provision supposedly admitted credit card companies to the Chinese market, a bit pointless given that mobile payments such as Alipay have captured the market and seen China leapfrog the credit card stage altogether.

Chad Bown of the US Peterson Institute says of the mooted EU-China deal: “As far as I can tell it sounds like it is mainly just the EU catching up with the measly bits in the US-China phase 1 agreement, including technology transfer and joint venture requirements.” There has to be a suspicion that even if it goes beyond this, any promises China makes in an agreement negotiated under this kind of time pressure will, in any case, be opaque and hard to enforce.

Meanwhile, China’s own motives almost certainly contain a strong political element. Its own compelling deadline is Biden’s inauguration in late January. Beijing may have its eye on some genuine economic gains, such as agreeing some tech transfer to China and softening resistance to Chinese investment in Europe. But the timing is clearly an attempt to drive a wedge between a potential EU-US alliance before the new administration takes over. The EU going along with this isn’t exactly the new transatlantic co-operation to restore confidence in a global rules-based system. It looks a lot more like standard-issue competitive mercantilism.

We’ll wait to see the detail of whatever deal emerges, assuming it does, before making hard conclusions. But it’s difficult for the EU to make a good argument either way. If the deal is shallow, it might not annoy the US that much but it’s surely not worth giving China a political win: if it’s deep, the EU should be co-ordinating with the Biden administration to open the Chinese market for all. Brussels signing up to a bilateral agreement jammed through quickly to meet political deadlines don’t really inspire confidence about a new post-Trump era of governance.

Global institutions, creditors and lobby groups are hurrying to come up with ways of tackling what many fear will be a wave of sovereign debt crises in emerging economies in the coming year. The economic and financial consequences of the pandemic threaten to tip dozens of nations into a fiscal crisis and to leave many others weighed down with debt and struggling to grow.

Bitcoin is legal tender in El Salvador. What does it mean for the broader...