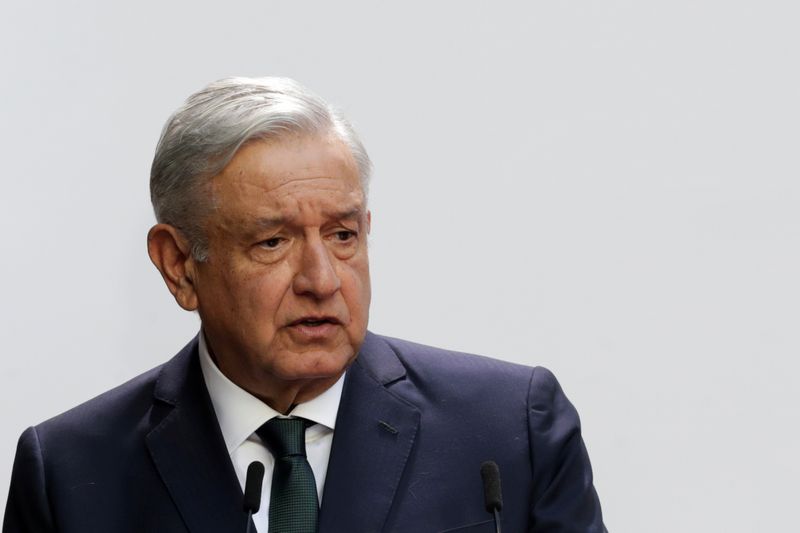 MEXICO CITY (Reuters) – Mexican President Andres Manuel Lopez Obrador said on Saturday he would not congratulate a winner of the U.S. presidential election until legal challenges are concluded, in an apparent bid to avoid friction with Washington during the transition.

Democrat Joe Biden won the election on Saturday after a victory in the battleground state of Pennsylvania put him over the threshold of 270 Electoral College votes.

Mexico is the United States’ top trade partner, with over $600 billion of annual two-way commerce, and the bilateral relationship with its northern neighbor is by far the most important for Mexico.

“With regard to the U.S. election, we are going to wait until all the legal matters have been resolved,” Lopez Obrador said at a news conference.

“I can’t congratulate one candidate or the other. I want to wait until the electoral process is over.”

Republican President Donald Trump has filed a raft of lawsuits to challenge the results, but electoral officials in states across the country say there has been no evidence of significant fraud, and legal experts say Trump’s efforts are unlikely to succeed.

The Mexican president linked his caution to his own allegations of fraud in two presidential elections he contested, in 2006 and 2012, before winning on his third bid in 2018.

His reluctance to comment on the U.S. results stands in contrast to congratulations offered to Bolivia’s former President Evo Morales last year despite opposition claims of fraud in that re-election bid.

Mexican officials said the decision was borne of a desire to avoid provoking Trump while he remained in the White House.

“Bolivia doesn’t have a 3,000-km border with Mexico,” an official said of the apparent contradiction. “It’s important to have a couple of months of peace and good neighborly relations.”

In his remarks, Lopez Obrador described the decision as “politically prudent.”

He said he had a good relationship with both Trump and former Vice President Biden, whom he said he had known for a decade.

He has needed to toe a fine line with Trump, whose term is scheduled to end on Jan. 20. A Biden presidency could reset ties that have frayed since Trump made his first White House bid, tarring Mexican migrants as rapists and gun-runners and vowing to keep them out with a border wall.

Under Trump, Mexico has had to navigate abrupt demands to stem illegal migration or face trade tariffs.

However, by acceding to Trump’s migration dictates, Lopez Obrador has forged an uneasy relationship of some mutual convenience, in which Washington has mostly avoided criticizing his economic policies.

“President Trump has been very respectful with us,” he said. “And we are thankful that he has not meddled.”