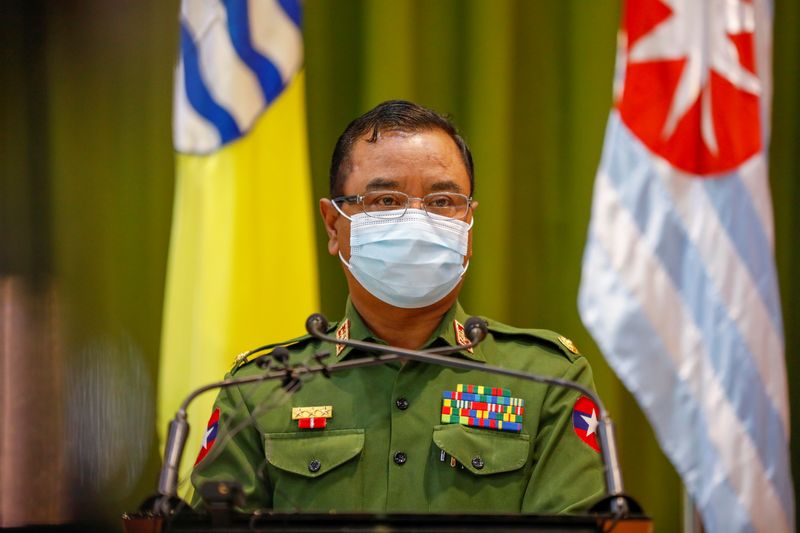 © Reuters. News conference ahead of new parliament term and formation of new government in Naypyitaw

NAYPYITAW, Myanmar (Reuters) – Myanmar’s army warned on Tuesday it would “take action” if an election dispute was not settled and declined to rule out staging a coup if its demands were not met, just days out from the convening of a new parliament.

Military spokesman Brigadier General Zaw Min Tun told a new conference there may have been fraud in the November contest, which was won in a landslide by Aung San Suu Kyi’s National league for Democracy (NLD) party.

“We will take action according to the constitution and existing laws if they don’t resolve the issue,” he said of the election commission, declining to give further details.

The NLD claimed a resounding victory in what was the second parliamentary election since the end of decades of strict military rule, during which the party and its supporters were persecuted.

The election was viewed as a referendum on Suu Kyi’s fledgling democratic government.

NLD spokesman Myo Nyunt told Reuters it was up to the election commission to decide whether there had been fraud. A commission spokesman could not be reached for comment.

Under a constitution it drafted, Myanmar’s military gets control of three ministries and a quota of 25% of house seats, a de facto veto on major decisions, ensuring it retains a key stake in national politics.

Zaw Min Tun sidestepped questions on what the military would do if its concerns about the election were not addressed.

Asked by reporters if it would cooperate with the NLD government and new legislature when it convenes on Feb. 1, Zaw Min Tun said “wait and watch on that matter.”

Asked if he would rule out staging a coup, he said “cannot say so”.

“We will take all available action including sending to the Supreme Court,” he added.

“We do this because we want a strong democratic system.”

TV Black Friday 2020 Deals: Are They Worth It? – NerdWallet