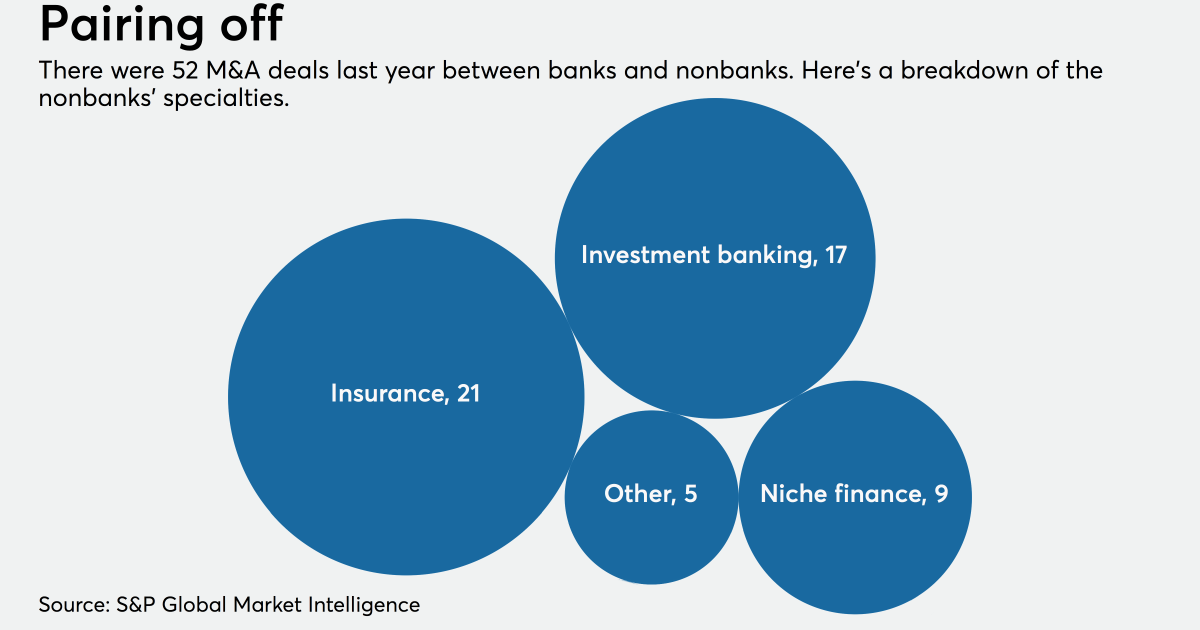 KeyCorp’s Chris Gorman recently ticked off the acquisitions he’s proudest of: no banks, but two boutique investment banks and an online student lender.

Meanwhile, fintech acquisitions “are highly likely” for the small but tech-savvy Citizens Bank of Edmond in Oklahoma, CEO Jill Castilla said. “It is a logical expansion for us,” the head of the $322 million-asset bank said Tuesday at a virtual conference hosted by Cornerstone Advisors.

Those kinds of comments are fueling predictions that M&A deals involving banks and nonbanks could rise sharply in 2021 after falling 33% — according to S&P Global Market Intelligence — to 52 last year.

To be sure, the pandemic slowed all banking industry merger activity in 2020 as banks scrambled to help struggling borrowers and gain a better understanding of their own credit exposures. But bank-nonbank deals seem ripe for a recovery as commercial banks seek more fee revenue to offset low rates and aim to beef up their digital capabilities while social distancing remains necessary.

Many banks describe the search for wealth management, insurance, fintech and other nonbank acquisition candidates as a priority. Several have already announced nonbank deals this year.

Quinlan Bancshares in Plano, Texas, the parent of the $820 million-asset Benchmark Bank, announced on Jan. 12 that it had agreed to acquire Ferguson Wealth Management in Waco, Texas.

More banks — especially larger regional banks — are scouting targets, said Peter Wilder, a lawyer at Godfrey & Kahn in Milwaukee who lectures on nonbank acquisitions at the University of Wisconsin Graduate School of Banking.

“If you take a sampling of annual reports and earnings calls, you’ll see a lot of them make the point of talking about noninterest income and revenue diversification,” Wilder said. “More banks should look at these types of acquisitions more frequently.”

Wealth management is emerging as a major focus for a growing number of would-be buyers.

The $6 billion-asset Peapack-Gladstone Financial in Bedminster, N.J., said it is looking to buy wealth firms in New York and Florida, and the $183 billion-asset Citizens Financial Group in Providence, R.I., is also keen to bulk up in the space.

“We’ve gone a long way towards cementing that capability, but there could be selective opportunities for us to augment our industry vertical approach with some boutique acquisitions,” Van Saun said.

“Clearly, we’re going to be in a low interest rate environment for a while,” Curry said. “Refinances may peak, but we’re still going to have purchase loans.”

“Smaller banks want to bulk up their mortgage businesses, whether that’s through acquisitions or just hiring,” he said “Mortgage is very cyclical, and banking has tended to try to avoid exposure to that cyclicality. Nobody wants to buy and be stuck when the market falls apart. That said, I think you’re going to see some mortgage deals this year, mostly at small and medium-size banks.”

“They’re often simpler transactions with less integration risk,” Wilder said. “It’s not like they’re riskless, but acquiring a nonbank business is far less onerous than trying to buy a whole bank. From a regulatory perspective, operational and geographic risk, all those things are much simpler.”

There are complications, including the potential for a cultural mismatch and challenges when it comes to determining a price. It is important for buyers and sellers to work out differences in advance and add protections into their merger agreements, industry observers said.

“A specialty-niche-type business can be more of a partnership and can create more options for structuring the purchase price in the form of employment agreements and other performance-based mechanisms,” Wilder said. “If things kind of hit a wall, it gives some protection for the buyer.”

Fee income remains the key driver behind most nonbank acquisitions. “Banks are trying to hedge their traditional lending business with these other specialty or niche-type lines they can pick up, whether it’s insurance agencies, a student lending business, or nonbank specialty finance companies that are out there,” Wilder said.

But revenue, or rather the lack of it, could also serve as a limiting factor, according to Curry.

Though Curry considers a rebound in nonbank M&A to be likely, he said that “for a bank to do a nonbank acquisition, they’ve got to be pretty confident about their capital and their earnings. At least three quarters of the bankers and investors aren’t there yet.”

“This was our way to springboard and take advantage of not only [additional] fee income, but also to think a little differently about how we could potentially launch new products in a more streamlined digital fashion,” Magennis said in an interview this month. “Everything is one click away now. Bankers need to think about how to compete with that.”

Key’s deals — it also bought the small investment banks Pacific Crest Securities in 2017 and Cain Brothers in 2014 — have had a similar transformative effect, according to Gorman.

“I’m really proud of the job we’ve done over many years of being able to buy entrepreneurial firms and successfully integrating them into our business,” Gorman said. “Those are the kind of businesses that I think really turbocharged our existing 3.5 million clients.”

Magennis expects banks to continue acquiring fintechs. “Bankers need to look to the future and having a fintech augment some of their traditional business lines,” she said.

In a quest to rein in its tech giants, China turns to data protection