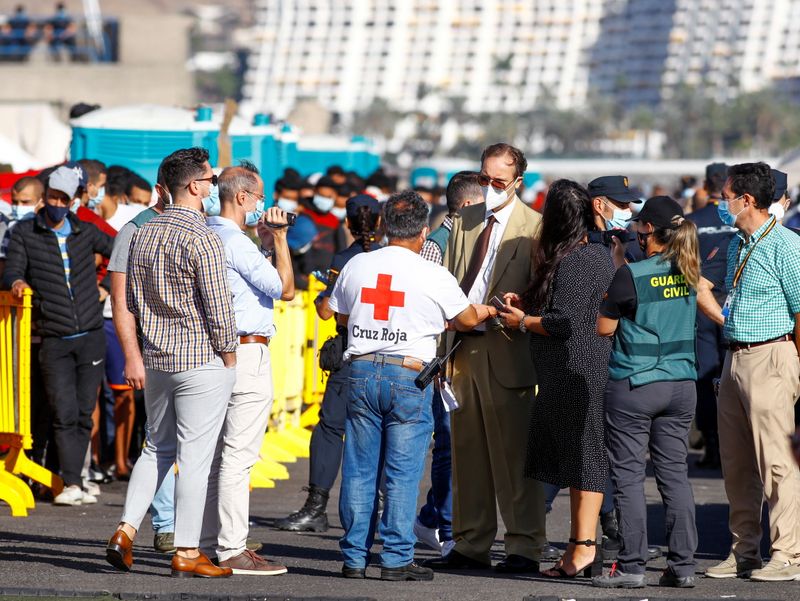 © Reuters. A judicial and police commission visit the camp where migrants rest after being rescued by coast guards or reached the island by their own means, in the Arguineguin harbour, on the island of Gran Canaria

LAS PALMAS, Spain (Reuters) – The Spanish government promised on Friday to set up camps and shelters for 7,000 people in the Canary Islands, to manage a surge in migrant arrivals that has overwhelmed local authorities and left thousands sleeping in the open.

Judicial authorities visited the port of Arguineguin on Gran Canaria island after a local mayor denounced the “subhuman conditions” of more than 1,000 migrants still stranded on the dockside there, to assess the situation and determine whether the crisis has been mishandled.

“We face a human tragedy and no one can or should look the other way,” Defense Minister Margarita Robles told state broadcaster RTVE. Her ministry has already turned over an old military warehouse for use as a camp for 800 people that opened this month.

Migration Minister Jose Luis Escriva told a news conference more temporary camps would be set up next month on the islands of Gran Canaria, Tenerife and Fuerteventura, where more than 90% of the migrants arrive, while the ministry keeps working on a more permanent solution.

Municipalities, the military and even private companies will temporarily hand over property for the camps and shelters for the 7,000 migrants, Escriva said.

Almost 17,000 people have reached the Canary Islands so far this year, more than 10 times last year’s total, after making the dangerous Atlantic crossing from north Africa. Although that is far from a peak of some 32,000 migrant arrivals in the Canaries in 2006, the COVID-19 pandemic has exacerbated the situation.

Countries such as Morocco shut their borders in March, so many north Africans grew desperate after losing their income from tourism and headed for the Canaries. Repatriating them became increasingly difficult for the same reason, Spanish diplomatic sources said.

An Interior Ministry source said that after repatriations dropped to practically zero following the border closures in March, “we are now recovering the (repatriation) capacity” and trying to prevent new arrivals.

MLB pulls 2021 All-Star Game out of Atlanta due to Georgia’s new restrictive voting...