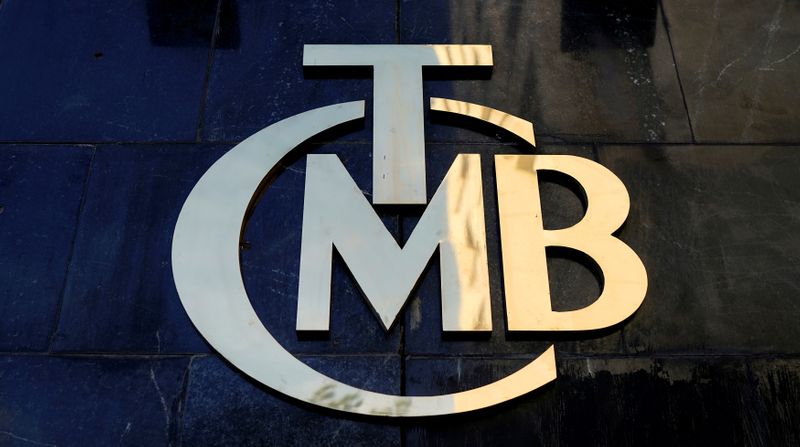 © Reuters. FILE PHOTO: A logo of Turkey’s Central Bank is pictured at the entrance of the bank’s headquarters in Ankara

By Ebru Tuncay and Jonathan Spicer

ISTANBUL (Reuters) – Turkey’s new central bank chief will hold a call with bank CEOs on Sunday afternoon, a day after he was appointed in a shock leadership overhaul that left investors predicting quick rate cuts and a lira selloff, two sources told Reuters.

In his first comments as governor, Sahap Kavcioglu said on Sunday the bank would continue to set policy to permanently lower inflation, which has been stuck in double digits for most of the last four years.

President Tayyip Erdogan abruptly sacked former central bank chief Naci Agbal in the early hours of Saturday, two days after a sharp interest rate hike, and named Kavcioglu, who like the president is an outspoken critic of tight monetary policy.

It was the third time since mid-2019 that Erdogan had ousted the head of the central bank, again threatening credibility that Agbal had begun to restore with a more orthodox approach since he took the reins in early November, analysts said.

“It is going to be a dark and long day on Monday,” said one local fund manager.

Cristian Maggio, EM strategy head at TD Securities, said the lira was likely to shed up to 5% initially, and possibly 10-15% in coming days.

“This announcement demonstrates the erratic nature of policy decisions in Turkey, especially with regard to monetary matters,” he said. Kavcioglu represents a risk of “looser, unorthodox, and eventually mostly pro-growth policies from now on”.

The online call with the heads of Turkey’s big private and public lenders will aim to address the current market and policy situation, said the two sources with direct knowledge of it.

The central bank did not immediately comment on the call. Kavcioglu, a former banker and lawmaker in Erdogan’s ruling AK Party (AKP), visited the central bank’s headquarters in Ankara earlier on Sunday.

The call could shed light on how policy might shift given Kavcioglu’s public calls for looser policy. In a newspaper column last month he said — contrary to monetary orthodoxy — that high rates “indirectly cause inflation to rise”.

For a graphic on Is tightening over already in Turkey?

In his less than five months in the job, Agbal had hiked the key rate to 19% from 10.25%, including a 200 basis point rise on Thursday to head off inflation near 16% and a recent lira slide.

His hawkish stance lifted the lira from record lows beyond 8.5 per dollar in November, dramatically cut Turkey’s CDS risk measures and started to reverse a years-long trend of funds abandoning local assets.

The lira had gained more than 3% since Thursday’s hike.

But after Erdogan ousted Agbal in the early hours of Saturday, investors told Reuters they had worked through the weekend to predict how quickly and sharply Kavcioglu might slash rates — and how much the currency would retreat from its Friday close of 7.2185 versus the dollar.

The heads of some local treasury desks estimated that offers could range from 7.75 to nearly 8.00 on Monday. At Istanbul’s Grand Bazaar on Saturday, one trader said a dollar bought 7.80-7.90 of the local currency.

Turkish stocks and bonds were also expected to drop in early-week volatility.

Kavcioglu said in Sunday’s statement that policy meetings will remain on a monthly schedule, suggesting any rate cuts may wait until the next planned meeting on April 15.

Homeowners Insurance Doesn’t Need To Be Expensive. Get It For As Low As $25/Mo — Before You Finish Your Coffee

Trick or Treat! Make These 5 Halloween Treats for About $6

Homeowners Insurance Doesn’t Need To Be Expensive. Get It For As...