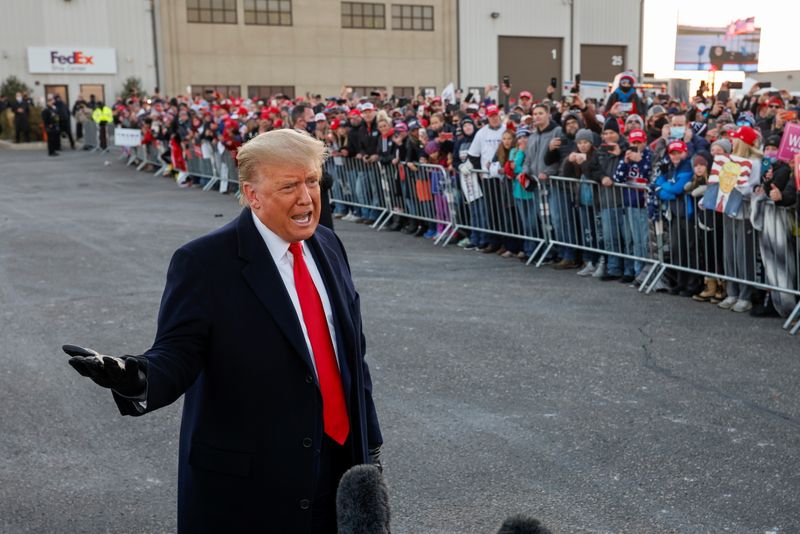 By Trevor Hunnicutt and Jeff Mason

DETROIT/READING, Pa. (Reuters) – A record 90 million Americans have voted early in the U.S. presidential election, data on Saturday showed, as President Donald Trump and his Democratic rival Joe Biden campaigned across the country to try to sway the few remaining undecided voters.

The high number of early voters, about 65% of the total turnout in 2016, reflects intense interest in the contest, with three days of campaigning left.

Concerns about exposure to the coronavirus at busy Election Day voting places on Tuesday have also pushed up the numbers of people voting by mail or at early in-person polling sites.

The Republican president is spending the closing days of his re-election campaign criticizing public officials and medical professionals who are trying to combat the coronavirus pandemic even as it surges back across the United States.

Opinion polls show Trump trailing former Vice President Biden nationally, but with a closer contest in the most competitive states that will decide the election. Voters say the coronavirus is their top concern.

Trump has repeatedly claimed without evidence that mail-in ballots are susceptible to fraud and has more recently argued that only the results available on election night should count. In a flurry of legal motions, his campaign has sought to restrict absentee balloting.

“I don’t care how hard Donald Trump tries. There’s nothing – let me say that again – there’s nothing that he can do to stop the people of this nation from voting in overwhelming numbers and taking back this democracy,” Biden said at a rally in Flint, Michigan, where he was joined by former President Barack Obama for their first 2020 campaign event together.

Trump held four rallies on Saturday in the battleground state of Pennsylvania, where the campaigns are seeking to win over undecided voters in areas like the suburbs of Philadelphia and the “Rust Belt” west of the state.

“If we win Pennsylvania, it’s over,” Trump told a large rally in Reading before moving to another big gathering in Butler.

Officials in several states, including Pennsylvania and Wisconsin, say it could take several days to count all of the mail ballots, possibly leading to days of uncertainty if the outcome hinges on those states.

A federal judge in Texas has scheduled an emergency hearing for Monday on whether Houston officials unlawfully allowed drive-through voting and should toss more than 100,000 votes in Democratic-leaning Harris County.

In Iowa, a new poll published on Saturday shows Trump has taken over the lead there just days before the election. A Des Moines Register/Mediacom Iowa poll shows Trump now leads Biden by seven percentage points, 48 percent to 41 percent. The results, based on a poll of 814 Iowa voters, suggests Biden has lost support among independent voters in the Midwestern state.

At a small, in-person rally in Newtown, Pennsylvania, Trump mocked his opponent for his criticism of the administration’s record of fighting COVID-19, which has killed more people in the United States than in any other country.

“I watched Joe Biden speak yesterday. All he talks about is COVID, COVID. He’s got nothing else to say. COVID, COVID,” Trump told the crowd, some of whom did not wear masks.

He said the United States was “just weeks away” from mass distribution of a safe vaccine against COVID-19, which is pushing hospitals to capacity and killing up to 1,000 people in the United States each day. Trump gave no details to back up his remarks about an imminent vaccine.

In his closing arguments, Biden has accused Trump of being a bully, criticized his lack of a strategy to control the pandemic, which has killed nearly 229,000 Americans; his efforts to repeal the Obamacare healthcare law; and his disregard for science on climate change.

He has offered his own made-in-America economic platform, a contrast with Trump’s “America First” approach, saying he will get the wealthy to pay their fair share and make sure earnings are distributed more equitably.

In an effort to highlight what he says is Biden’s plan to ban hydraulic fracturing, or fracking, to extract fossil fuels, Trump signed an executive order on Saturday that calls on the U.S. Department of Energy to commission a study about the potential harm caused by banning or restricting the practice.

The order also reinforces a prior law, directing federal agencies to produce reports about decisions that are detrimental to the fracking industry. Fracking for is a major source of jobs in western Pennsylvania. Biden denies intending to ban fracking if he wins the White House.

Stanford University economists on Saturday released an estimate that Trump rallies held from June to September led to more than 30,000 additional COVID-19 infections and possibly as many as 700 deaths. The study was based on a statistical model and not actual investigations of coronavirus cases. The paper, which did not cite disease experts among its authors, has not been peer-reviewed.

Public health officials have repeatedly warned that Trump campaign events could hasten the spread of the virus, particularly those held in places where infection rates were already on the rise. Determining the actual impact of those rallies on infection rates has been difficult due to the lack of robust contact tracing in many U.S. states.

Amesh Adalja, an infectious diseases expert at the Johns Hopkins Center for Health Security, described the report as “suggestive.”

“I would just say it’s suggestive but hard to completely isolate the specific impact of one event without robust contact trace data from the cases,” Adalja said.

Biden’s campaign, which has sharply limited crowd sizes at events or restricted supporters to their cars, quickly seized on the Stanford findings.

“Trump doesn’t even care about the very lives of his strongest supporters,” Biden campaign spokesman Andrew Bates said in a statement. Trump’s campaign did not immediately respond to a request for comment on the report.

At one Biden rally in Detroit on Saturday, social distancing broke down as supporters crowded toward the stage to hear Obama speak.

(This story was refiled to correct typographical error in paragraph 13)