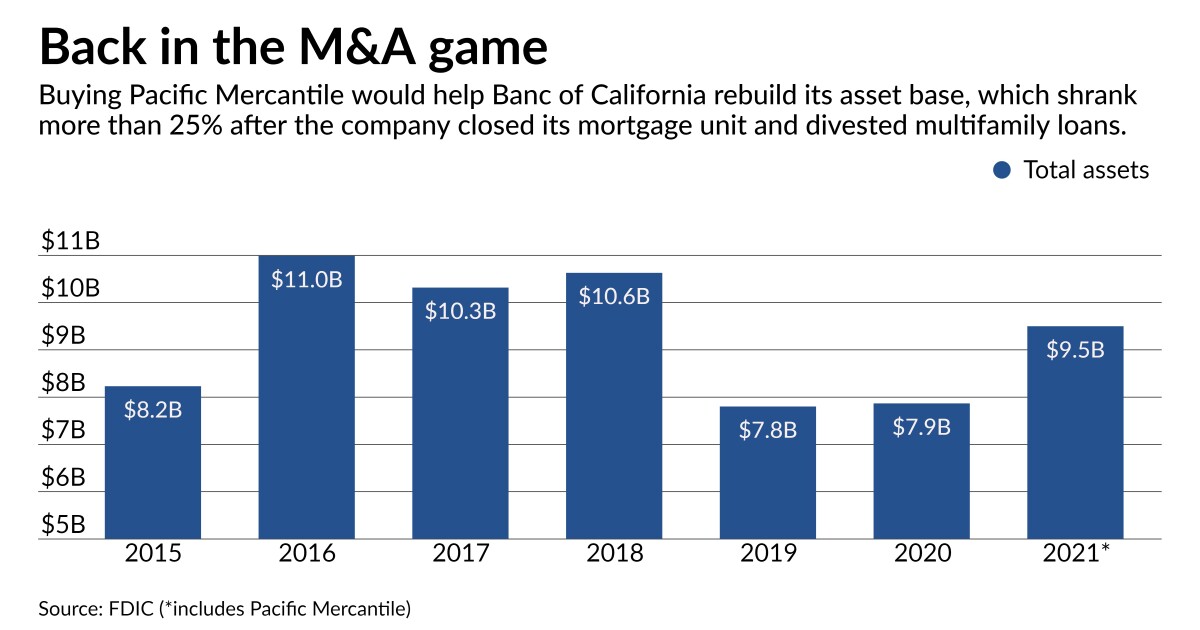 Banc of California in Santa Ana needed a compelling reason for its first acquisitions in years, and Pacific Mercantile in Costa Mesa, Calif., checked off all the boxes.

The $7.9 billion-asset Banc of California agreed on Monday to buy Pacific Mercentile for $235 million.

The companies have overlapping branch networks and a similar mix of clients, which should limit some risk as Banc of California plans its first integration since 2014. At $1.6 billion of assets, Pacific Mercantile is manageable enough to digest while big enough to meaningfully boost profitability.

Jared Wolff, who became Banc of California’s CEO two years ago, and his team were also able to make the financials work. That gave everyone confidence that they could pull the acquisition off and perhaps set the stage for more deals in the future.

“This team as a whole has not done M&A together,” Wolff said in a Tuesday interview. “This is an opportunity to refine our playbook and get it right.”

Banc of California, created in 2010 when Steven Sugarman led a recapitalization of First PacTrust Bancorp, aggressively expanded through acquisitions and hiring across California. After Sugarman’s abrupt departure in 2017, the company scaled back, shedding its mortgage unit and selling off multifamily loans and securities to improve profitability and replenish capital levels.

Total assets fell by 30% between 2016 and 2019, dipping below $10 billion, and there was some speculation Banc of California could become a seller. Hiring Wolff, who had M&A experience while at PacWest Bancorp, signaled otherwise.

Other members of the executive team, including Lynn Hopkins, the company’s chief financial officer, and Ido Doten, its general counsel, also have significant M&A experience.

Now those executives have a chance to pursue a more-focused expansion compared to prior management, industry observers said.

“I thought they were all over the place [under Sugarman] and they weren’t necessarily creating an enduring business with good earnings,” said Tim Coffey, an analyst with Janney Montgomery Scott. “What they’ve got now is much more streamlined, much more predictable and a much better investment opportunity.”

Wolff said several metrics excite him about the deal. About half of Pacific Mercantile’s $1.4 billion of deposits are non-interest-bearing. Banc of California also plans to cut at least 35% of Pacific Mercentile’s annual noninterest expenses.

“I wouldn’t be surprised if the cost saves are actually higher than 35%,” Coffey said. “This could be a better deal than advertised for Banc of California.”

Pacific Mercantile, which Wolff characterized as a true commercial bank with expertise in distribution, manufacturing and logistics, also has a data analytics platform that Banc of California wants to promote to its customers.

With interest rates low and revenue under pressure for most banks, M&A may provide a safer growth alternative to aggressively going after new loans, Wolff said during a conference call to discuss the deal.

SoFi agreed to buy Golden Pacific Bancorp in Sacramento to further its plans to obtain a bank charter. An investor group struck a deal to buy Northern California National Bancorp in Chico, and Feather River Bancorp in Yuba City recently agreed to be sold to Plumas Bancorp in Quincy.

While the Pacific Mercantile deal would make Banc of California more attractive to a bigger buyer, Coffey said he believes the company’s board would be reluctant to sell while it continues to perform well.

And, at some point, Banc of California could pursue more deals of its own, Coffey said.

That could take a while as the team as the team shakes off any rust while integrating Pacific Mercantile. Wolff said there is no pressure to announce another deal to jump back over the $10 billion asset threshold where interchange fee caps and more regulatory scrutiny kick in.

“We understand the implications of operating above $10 billion,” Wolff said. “We know what systems and what people and processes will need to be in place.”